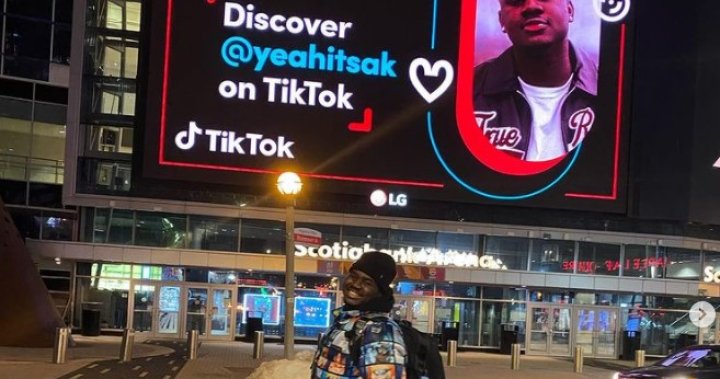 NOTE: The embedded video content below contains language that might not be suitable for all audiences. Please watch at your own discretion.

In celebration of Black History Month, TikTok is spotlighting the contributions of its Black creators by amplifying their talents through the second annual Black TikTok Trailblazers list. On that list is Toronto rapper Akintoye (@yeahitsak), known for his clever and relatable rhymes.

Akintoye got started on the social media platform shortly before the COVID-19 pandemic hit. A performer since middle school, he’d already been uploading some of his short rap videos to Instagram.

But it wasn’t until a group of junior high kids he was working with shamed him for not being on TikTok that he decided to give the platform a go.

“I was 20 at the time and they made me feel old,” he told Global News with a laugh.

It turns out pivoting to the platform was a great decision. Shortly after COVID-19 started, an asthmatic Akintoye found all his usual performance venues shuttered and he had no desire to leave the house. His first video, a response to another rapper’s challenge, did some “insane numbers.”

“At the time, I’d never seen anyone outside of my friends acknowledge that I made music so when I was getting, like, 10,000 views, I thought, ‘Oh my God, I’ve never seen numbers like this in my life. This is insane.’”

As it turns out, 10,000 views was a relatively paltry number compared with some of the impressions he’s garnered more recently.

Most notably, his song I’m Broke boasts over 28.7 million views and an additional 20,000 video creations using the song.

Akintoye says signing up to TikTok changed his life.

“Prior to using TikTok, I was just trying to figure it out … I didn’t know what the next step was,” he said.

“Since TikTok, I’m a dude that holds some kind of weight in people’s eyes now. A plethora of opportunities have landed in my lap since then, and now this is my full-time job.”

He’s grateful to have TikTok as a platform and thrilled to make the Black Trailblazers list — he was especially stoked to see his face on a billboard at the Scotiabank Arena in Toronto earlier this month — but says the list is just a start in recognizing the contributions of Black artists and creators.

“Companies need to start looking at Black creators as just as valuable as white creators, if not more valuable,” he said.

“A lot of companies will look at us and assume our fan bases don’t have the money to spend, … or they want to box us into some ‘urban’ category. Companies (should) look at us and realize we have just as much, if not more, value than our (white) counterparts.”

Global News sat down for an extended interview with Akintoye in which he shared how he comes up with his hilarious and relatable raps, how non-Black people can be better allies to Black creators on social media, and also shared some of his advice for other Black creators.

(You can watch the video interview in full, top.)