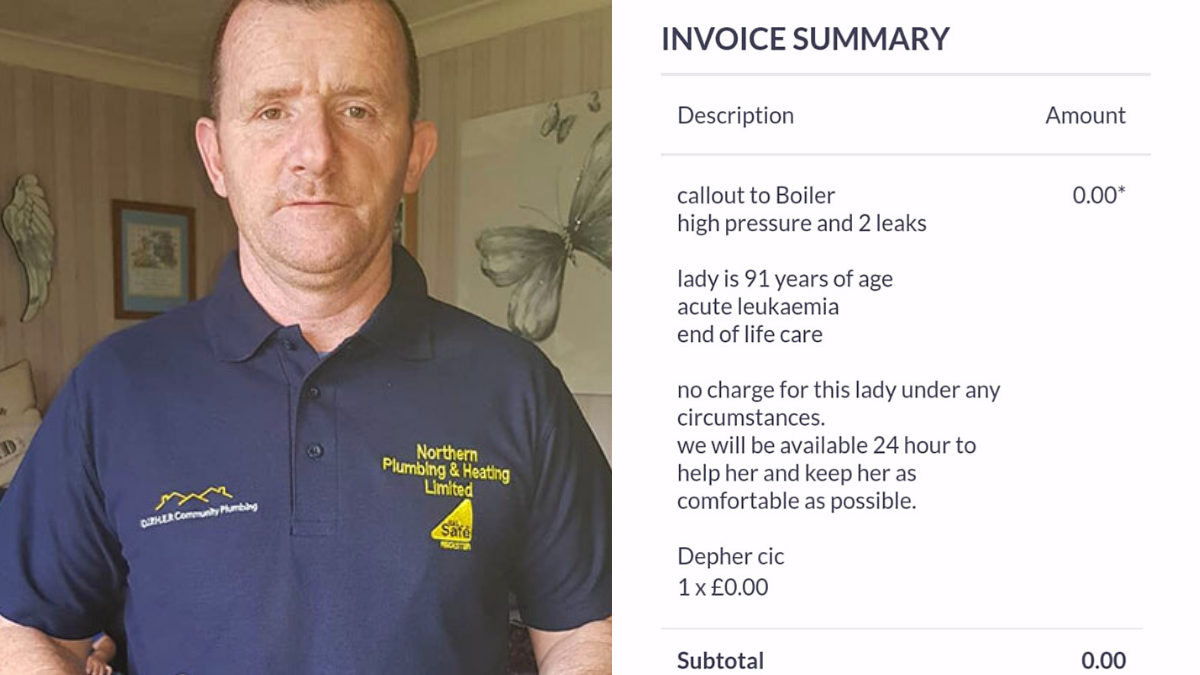 James Anderson is a father, a plumber, and to many in the United Kingdom, a “godsend.”

In 2017, Anderson closed his private business and devoted himself entirely to helping disabled and elderly people with their plumbing issues- for free (with that said, here are some kindness quotes).

Anderson made the decision to entirely commit to not-for-profit work when a receipt that was posted online went viral. It showed that he charged a 91-year-old woman with acute leukemia £0 for the job.

“No charge for this lady under any circumstances,” he wrote, as shared by Metro UK. “We will be available 24 hours to help her and keep her as comfortable as possible.”

To do this saintly work, Anderson has gone into £8,000 of debt- but he isn’t too worried about it.

“To me, debt is debt… I would rather owe some money to somebody and another person be alive and happy and safe,” he told Metro UK (Here’s how to get out of debt).

It’s an ethos that’s in my heart and it will always stay there.

To pay for his supplies and costs, Anderson launched a fundraising campaign that pulled in £49,309 over the 42 days it was live.

During the campaign, he filmed heartwarming videos with some of the people he helped, including this one:

Anderson’s work might not be as popular as supporting those impacted by war or hunger, but it’s necessary nonetheless.

“I don’t want any person who is elderly and disabled in this country, in this day and age, to die or suffer because of a cold home or a lack of funding to repair the boiler,” he said. “It shouldn’t be happening– that number should be down to zero. Simple as that.”

Help others in unexpected ways

There is a serious problem in our society when disabled people and our elders- our moms and dads, sisters and brothers- don’t have enough money to fix their broken toilets or showers. Sadly, without someone like a child to look after them, these people can be forgotten (here’s how to deal with loneliness).

Fortunately, the world still has people who use their skills for good, like James Anderson did. The lesson here is to help someone in need- it can really mean the world to them.

“No one is useless in this world who lightens the burdens of another.” – Charles Dickens