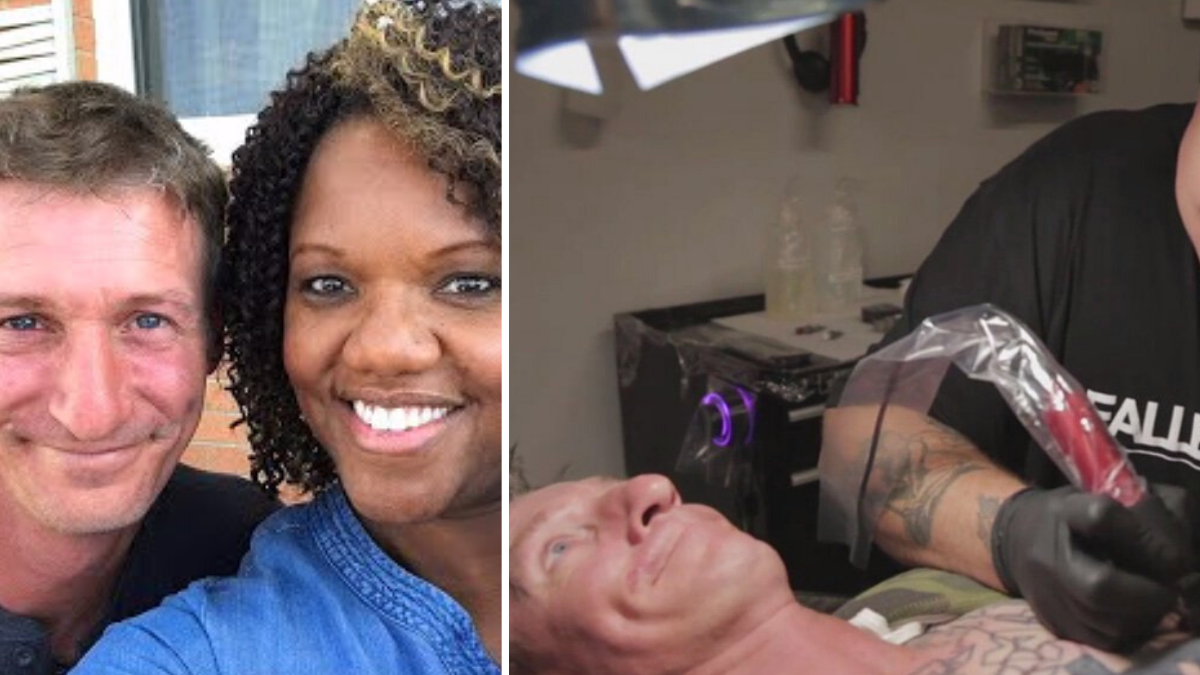 For most, the American Dream is still having a solid job, raising a family, and pledging allegiance to the flag.

Things were much darker for 38-year-old Michael Kent.

Kent’s vocation was hate; his family was a part of a violent skinhead gang, and his flag was a swastika, two of which he got tattooed- along with ‘white pride’ inked on his back- while in prison as a calling card to others.

When finally released, his path seemed to pave right back to his hateful ways. After all, it’s all he had known for 20 years.

But destiny, as he would soon find out, has a way of being rerouted in the wildest of ways.

She made her mark on him

One day, Kent was informed that his caseload was being transferred to a new parole officer. That in itself was no big deal. However, finding out that the 45-year-old Tiffany Whittier was Black, was.

Yet, that wasn’t even the biggest shock for Whittier during her first visit; Kent recalled that moment to ABC vividly.

I have a German war flag, and she’s like, ‘You need to take that crap down and start putting up more positive stuff. Put up a smiley face, so when you wake up you see positive instead of hate.’

Whittier said her intentions were true. “I’m not here to judge him. That’s not my job to judge. My job is to be that positive person in someone’s life, to try to make a difference,” she said.

Turns out she did more than either expected.

Over time, Whittier’s persistent positivity melted away Kent’s armor. Her words gave Kent the motivation to take small steps towards a new, positive life. Then, those steps turned into a leap.

Whittier helped connect Kent with ‘Redemption Ink,’ a national non-profit that offers free removals of hate-related tattoos. And so, at ‘Fallen Heroes Tattoo’ in Colorado, Kent began the 15-hour process of removing his hateful prison ink.

While physically painful, Kent said ‘it’s all worth it.’

A zebra changes its stripes

Today, the space above Kent’s heart where there was once a swastika is filled with a new life of love and acceptance.

He’s now working at a chicken farm and is the only white person, something he admits the old Kent would never fathom.

“Before all this, I wouldn’t work for anybody or with anybody that wasn’t white,” he said. “(Now), we have company parties or they have quinceañeras, I’m the only white guy there.”

Giving thanks to Whittier, Kent describes her as much more than a parole officer.

“If it wasn’t for her I would have seeped back into it,” said Kent. “I look at her as family,” he said.

With a new life ahead of him, Kent is focused on smart goals, like being the right role model for his children.

Kent has a strong message both for those on the wrong path and for others who are in a position to help.

If you have a strong support system, and you have people that believe in you in a positive way, you can change.

These days, everything’s a hot topic or culture war battle. However, with Whittier’s unconditional love– and Kent keeping his heart open just a crack- it’s proof that there’s no fence which people can’t mend together.

treat everyone with love

“Respect begins with this attitude: I acknowledge that you are a creature of extreme worth.” – Gary Chapman