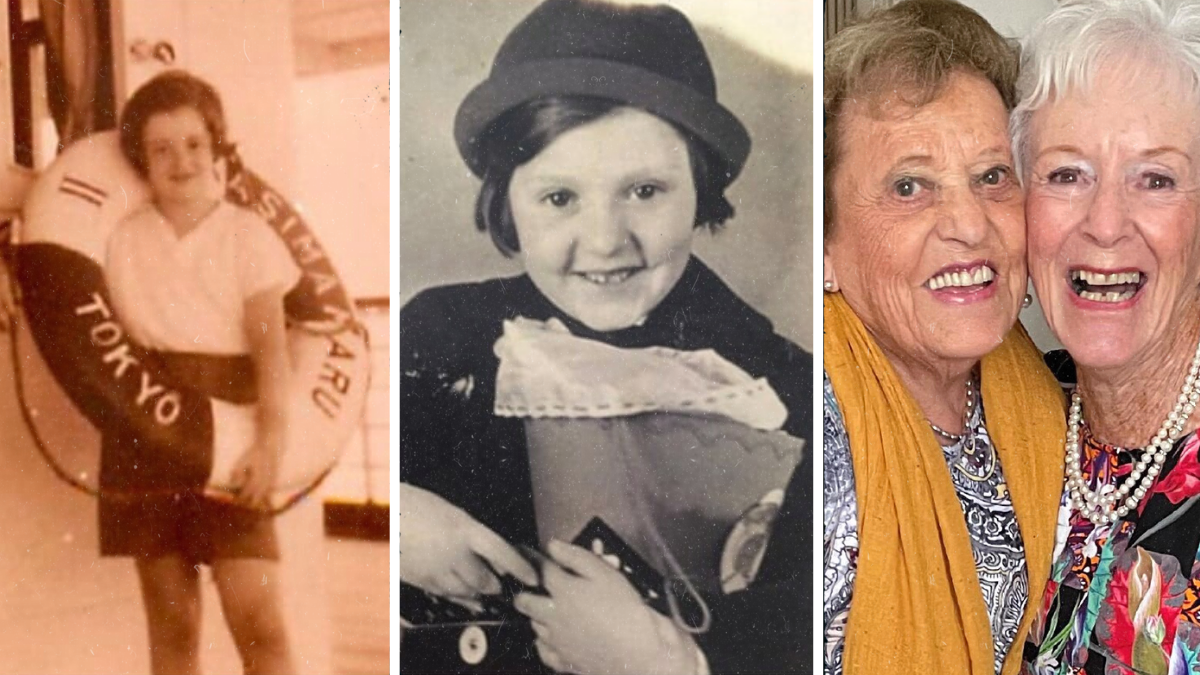 They say true friends will always pick up again where they left off, no matter how long it has been. Betty Grebenschikoff and Ana María Wahrenberg proved that last year when they hugged it out after more than 80 years apart.

Growing up in Berlin just before World War II, Betty Grebenschikoff and Ana María Wahrenberg weren’t allowed to play in many public spaces. Their families were Jewish, and laws were in place to keep them away from other Berliners. Still, the girls attended school together and hung out at each other’s houses like the best friends they were, despite their circumstances.

We just stayed with each other and we managed even to get in trouble in each other’s homes- eating too much candy and playing tricks on our mothers and so on.

But when the Nazis began carrying out mass, anti-Jewish violence on German citizens in November 1938 in an event known as Kristallnacht, or “Crystal Night,” both girls’ families knew they needed to flee the city.

“We thought that was just fine because we weren’t used to running around outside anymore,” Grebenschikoff told The Washington Post.

“My family and I… sat on the floor in our apartment and switched off the lights, and we were told to be very quiet so the neighbours would think we were not home, so they wouldn’t denounce us to the mobs,” Grebenschikoff recalled. “Crystal Night was the turning point for everyone- even for eight-year-olds.”

By Spring 1939, Grebenschikoff’s family decided to leave. The girls’ dads took them to the playground to say goodbye, and they hugged each other tearfully.

We both promised to stay in touch and get back together again.

According to the publication, Grebenschikoff’s family first fled to Shanghai where they didn’t require a VISA. Then, 10 years later, they went to Australia, and three years following that they settled for good in the United States. Wahrenberg’s family, meanwhile, went to Santiago, Chile, and stayed put. Wahrenberg still lives there today.

“I wrote her a letter when I got to Shanghai, which I believe she still has. And I told her where I was and that we would stay in touch. But I never heard from her. Never heard another word. Nothing,” Grebenschikoff said. “I just eventually figured that she might be dead.”

Grebenschikoff grew up to be a Holocaust educator, sharing her experiences through a memoir and speaking events around the States. She never stopped looking for her friend though, and during every event she would always drop Ana María’s name in the rare case that someone in the crowd knew of her or where she had ended up.

Fittingly, Wahrenberg also grew up on the same career path and was educating people in Chile. She too had been looking for her childhood friend all these years, a feat that was made even more difficult by the fact that they had both changed their first names. Finally, a researcher named Ita Gordon with the USC Shoah Foundation realized the link between the two women.

“I was so stunned by it, I didn’t know what to say,” Grebenschikoff recalled about finding out her friend was still alive.

It sunk in that this was really my girlfriend. This was the one that I was always talking about.

Reconnecting during a pandemic

In 2020, the USC Shoah Foundation, the Florida Holocaust Museum, and the Interactive Jewish Museum of Chile connected the women via Zoom for the first time in more than 80 years. The pair quickly caught up, filling each other in on their lives, reliving the good times, and promising to keep in touch. They did, and finally, in 2021, they reunited to do all of the friend-like things they had missed out on over the years like lunching, shopping, and spending time with each other’s families. It was 82 years after they had last vowed to stay friends.

“It’s amazing that we were both on the same path as we got older, teaching the Holocaust, particularly to children and to grown-ups as well, and explaining what happened there- that six million Jews really did perish in the Holocaust, because people think that maybe that’s overblown, but it isn’t, as we know,” Grebenschikoff said.

It was real and unreal at the same time. It was just wonderful.

This story highlights the power of platonic love in life. These two women spent more than eight decades not knowing what was going on with each other, or even knowing if the other one was alive. Yet, they showed extraordinary resilience, and never gave up on their bond.

Many of us are lucky to not be in the same situation as those young girls were, but their story reminds us that when you find a good, true friend, it’s worth keeping in touch with them. Life gets busy, but it’s never a bad idea to shoot a quick text or email, or to even pick up the phone and try to figure out a time for coffee or lunch. And if you do have a friend that you haven’t talked to in a really long while, maybe it’s time to reach out. After all, if these friends can reconnect after 82 years apart and pick up where they left off, maybe you and your old best friend can too.

make time for the people you care about