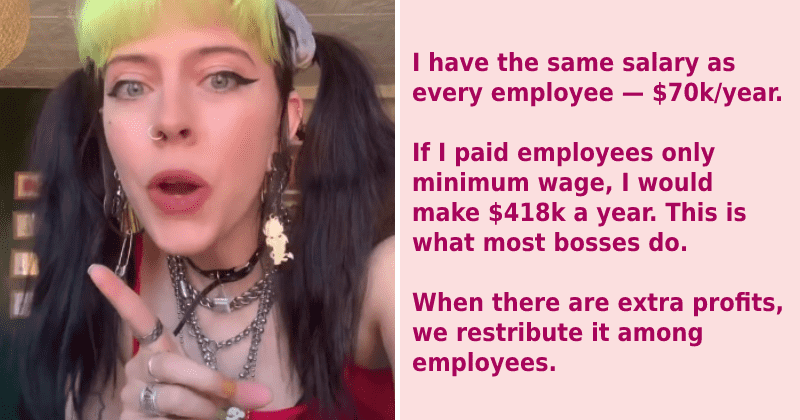 We always hear pushback about raising the minimum wage, but the story of this store owner in Los Angeles proves how unfair the current system really is.

She walks the walk

Madeline Pendleton is a popular Gen Z influencer who owns a clothing line that focuses on size inclusivity, sustainability, and economic equality, explains God Daily Dot. She also owns a vintage shop in Los Angeles called Tunnel Vision and hosts a podcast, Pick Me Up, I’m Scared, which often talks about labor exploitation.

In a recent TikTok post, Pendleton proved that she practices what she preaches.

“How would your life be if you and your employees didn’t earn the same?”

She makes as much as her employees

“It still feels very rich to us because we are used to being poor,” she said.

But then Pendleton explained what would happen if she paid her staff the minimum wage in LA, $14.25 per hour, and kept the rest. That would drastically drop her payroll expenses to $177,000 per year, leaving her a wage of $420,000.

“This is what most bosses are doing,” she concluded.

She used profits to buy her staff new cars

In a second video, Pendleton answered a response in the comments that accused her of keeping all the profits as the owner.

“I have the same salary as everyone else,” she replied. “When there are extra profits throughout the year, we do things for everybody.”

Things like buying everyone in the company a car who wanted one.

“After we netted a huge profit from a recent sale, we bought everyone who needed one, a new car, paid off the remaining car loans for everybody else,” she added. “We also put an option for people who didn’t drive, telling them: ‘Hey if this changes in the future, and you want to drive, we got you.” So ya, we do sh*t like that and get as close to zero as possible. There’s no profit leftover and we’re distributing it all year long.”

This needs to change

Yes, some small business owners struggle to pay their staff with the humble profits they make, but others hoard their income, perpetuating an unequal system. By being transparent about her pay, Pendleton is showing this exploitation inherent in capitalism and proving that owners have a choice. Hopefully, others in her generation will listen and bring forth the necessary change that previous generations have failed to do.