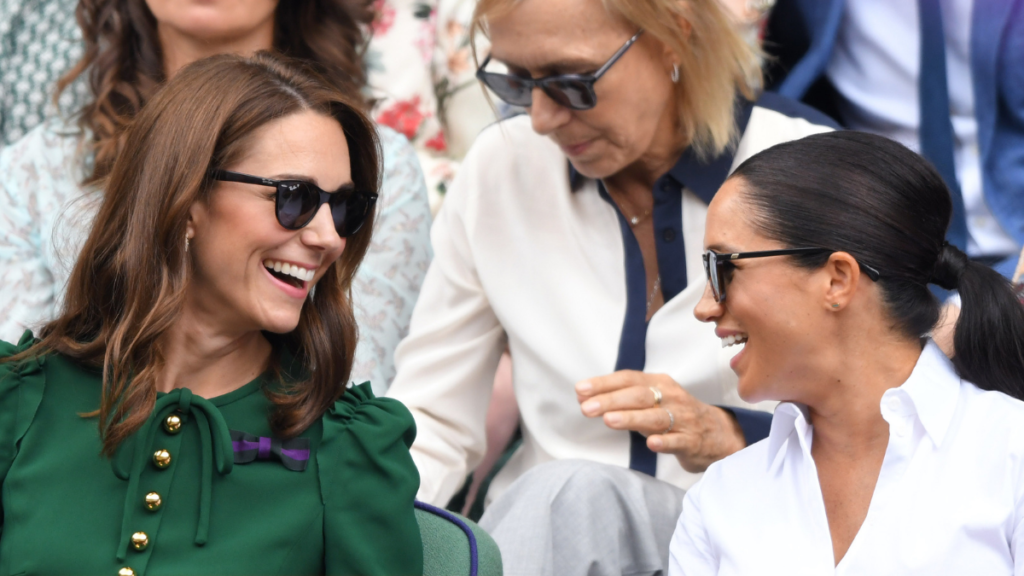 Over the span of a few short years, Meghan Markle has cemented her status as one of the most powerful women in the world.

However, this precipitous rise hasn’t been without its fair share of blood, toil, tears, and sweat. At every turn, Meghan has had to endure the stigma of being the outsider, someone who has to meet, if not exceed, the impossible expectations of those imposed on a Duchess, or as a matter of fact, any esteemed member of the English Royal Family. What complicated the transition was her inherent “otherness” and how the press singled it out repeatedly to trigger the masses and sway opinion. The media coverage became so vicious, obsessive, and predatory that it eventually played a part in driving Harry and Meghan from the monarchy for good.

A lot of naysayers argue Kate Middleton went through the same process of scrutiny and judgment, and everyone in the family has to bear the slander at some point or the other. How else are they going to justify their grand existences? However, Meghan’s arrival and subsequent assimilation into the family have been unlike any other newcomer. Moreover, you can’t deny there isn’t a stark distinction between Kate Middleton and Meghan Markle.

It’s high time we unpack their relationship and examine how the media’s treatment impacted their journeys through and outside the monarchy:

Kate also started out receiving intense criticism from the press

It’s hard to say when the rivalry commenced or whether it even existed before the press decided to run with the narrative. The media has been pitting the two Duchesses against each other for as long as one can remember, and they don’t intend to slow down anytime soon.

Meghan pointed out in the famous Oprah interview that “making Kate cry was the beginning of a real character assassination” on the media’s part. The story stemmed from a report alleging Meghan Markle, during the preparation of her wedding ceremony, had an argument with Kate Middleton regarding flower girl dresses that apparently led to the latter in tears. Meghan debunked the report in the interview and confirmed it had been the opposite — Kate had made her cry — and said Kate had apologized for her behavior and sent her flowers as a gesture.

The flower girl debacle was just the tip of the iceberg. Over the years, the English tabloids have been working to the bone to compare and contrast the two women and dissect their individual styles and choices. Meghan was initially hailed as a beacon of progressiveness for the age-old institution, a figure who would carve a new path for the family and bring them up to modern-day sensibilities. Weirdly enough, Kate Middleton, before her long-awaited engagement to Prince William, had been characterized as boring, bland, and ‘Waity Katie,’ a desperate young commoner just waiting to hit the big time and become a future princess, no matter how long it took.

As Meghan became an official Duchess, the tides turned, and the media launched an aggressive, organized campaign against her. She became the villain in every single situation, her each move scrutinized to death, her each appearance put under the microscope. Her estranged family from her dad’s side only worsened the disparagement — they leveraged their moment in the sun to make money and spew lies about their own half-sister and daughter.

Yet, it pales in comparison to how Meghan has been covered in recent years

An insightful article from Buzzfeed paints a grim picture of how the Duchesses have been respectively portrayed in the media over the past few years and the “double standard” that seems to echo through.

For example, Kate is “tenderly” cradling her baby bump, but when Meghan does the same, the article changes course and asks, “Why can’t Meghan Markle keep her hands off her bump?  Experts tackle the question that has got the nation talking: Is it pride, vanity, acting – or a new age bonding technique?” In another blatant case of prejudice, William is praised for gifting his wife an avocado to alleviate her morning sickness, but Meghan’s avocado is, all of a sudden, linked to “human rights abuse and drought.” It’s clear there is a rather significant bias in the media; what’s worse is that a lot of the public has fallen prey to the agenda, just as it was intended.

So why is there a bias at all? Well, there could be a number of factors, none of which have or will ever be verified. Meghan’s biracial ethnicity, background as an actress, divorceé status, and nationality have been identified as potential sources of her controversial image. Her race, in particular, has been cited as the number-one driving force of the double standard. Additionally, it could be Meghan’s advocacy that may have caused some disgruntlement among the institution, especially when the masses are so accustomed to the royals staying apolitical and ‘safe.’

On the contrary, Kate has been delivering everything that’s asked of her since becoming a Duchess. She’s elegant, gentle, dedicated to her role as wife and mother, and doesn’t try to challenge the status quo.  She follows protocol to the tee, doesn’t complain about any of its pains, and displays endless devotion and reverence to the crown; she fulfills her obligation just as a royal family member should. The qualities that were once ridiculed by the press — being a Plain Jane, having no charisma, being dependent on William — are now being celebrated.

It’s no coincidence this tide turned with the introduction of Meghan into the English public consciousness. When you want to vilify someone, you have to measure them against someone deemed more quintessentially soft, maternal, and subservient, who’s willing to play nice and adhere to tradition in the most frustrating of circumstances. Kate being upheld as the exemplary, beloved future Queen to the country is a direct result of Meghan’s ostracization from the circle. Had Meghan been white and English and someone more digestible and compliant in the public’s eye, Kate could still be facing the brunt of the vitriol.

It is important to rise above the tension

If there’s a moral to the story, it’s that women will always be pitted against each other to serve existing power structures. There’s a lot to be gained in manufacturing outrage among the English masses and breeding division concerning the royal family. The monarchy has always been a contentious issue, so when you add a Black American to the mix, the polarization becomes more and more prominent. The ordeal with Harry, Meghan, and the royal family is ongoing, so time will tell whether there is any improvement or development in how Meghan is being depicted in the press.

Of course, it feels nearly impossible to relate to their tension, but everyone is familiar with feeling like an outcast at times and not knowing how you can stand up for yourself without challenging someone openly. How do you establish your status without threatening someone else’s? As much as people try to sow discord, you have to rise above the hostility and look at the bigger picture. Is the animosity worth your time, does a rivalry empower you in any way, and wouldn’t it be much better if you were able to co-exist peacefully and not exhaust your energy on a futile feud?

Jamie Lee Curtis and Christopher Guest’s Advice For A Successful Relationship Is Just Two Simple Words
The Touching Reason Why Mila Kunis Refuses To Spoil Her Children Will Change The Way You See Her
The News Negativity Bias
Interabled Couple Gets Married Despite Naysayers, Proving That Love Is For Everyone
Single Mom Fat-Shamed By Gym Receptionist Has Best Response