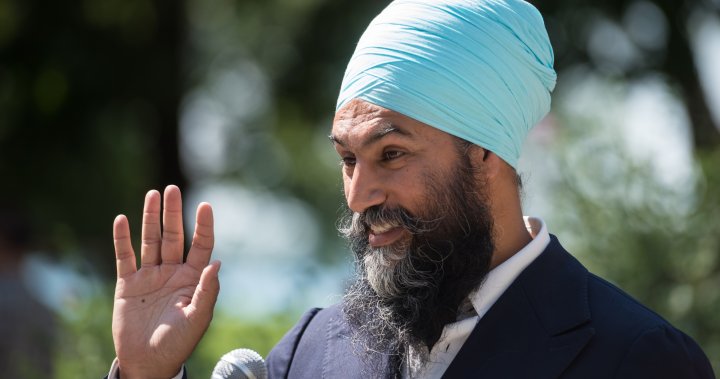 Jagmeet Singh was barely out of his teens when he took his little brother in.

A biology student at the University of Western Ontario, Singh insisted on looking after Gurratan, then 15, following a nearly violent confrontation with their father that prompted a police call to their farmhouse in Windsor, Ont.

The change was a blessing for both, offering a stable environment for the younger sibling and a chance for the two to reconnect.

“I was getting a little bit frightened, quite frankly, and anxious being at home. And he kind of, at the perfect moment, took me off to London, Ont. I think he was very sensitive to the fact that he didn’t want me to feel those emotions again,” said Gurratan, now a lawmaker in the Ontario legislature.

The duo lived there for three years along with their German shepherd, Jugnu, with college friends popping in and out via the balcony across from a nearby mall to walk the dog unprompted while Singh worked three jobs, Gurratan said.

“He’s a really great cook now, but back then he wasn’t the best,” his brother recalled. “I remember one time I was really hungry… He passed me this plate of pasta, and it’s all these chopped-up veggie dogs. “I was like, `What is this, man?’ But he was trying his best. He was trying to do what he’s always done: make the best out of a tough situation.”

The same might be said of the current election campaign.

Jagmeet Singh consistently enjoys the highest net favourability ratings of any federal leader and has a record to run on after nearly four years as leader of the federal NDP, but his prospects of returning New Democrats to the official Opposition status they achieved in 2011 — with most of that caucus based in Quebec — appear a long way off from the fourth-party spot they have now.

Having been reduced to 44 seats in the 2015 election that returned the Liberals to power under Justin Trudeau, the NDP managed to send just 24 MPs to the House of Commons under Singh’s first campaign at the helm in 2019.

That smaller caucus nonetheless wielded some influence in the minority Parliament, securing enhanced pandemic benefits and paid sick leave in exchange for supporting the throne speech. Days before Trudeau visited the Governor General, Singh wrote the prime minister a letter, which he published on social media, accusing him of breeding cynicism for telling Canadians that a minority government cannot work.

Nonetheless, he treads the campaign trail with a smile, inviting comparisons to the “happy warrior” persona of venerated former NDP leader Jack Layton. His gait is a confident stride, a slower version of the catwalk struts he’s trotted out at fashion shows and gala fundraisers in recent years.

At a coffee shop west of Ottawa’s downtown earlier this month, Singh, 42, displays the selective style for which he’s become known: a maroon polo made by British Columbia’s Reigning Champ, jeans from Montreal’s Naked and Famous Denim, and an artisanally crafted kirpan — a ceremonial Sikh dagger — cut from spalted maple by a knifemaker in Cobourg, Ont.

The GQ-esque esthetics — from the 2017 spread in said magazine to the Rolex watches and urban bicycles — might seem at odds with the working-class voters traditionally courted by the NDP. But he’s described his sharp fashion sense as a kind of armour against racial prejudice, a form of cladding that dates back to his time as a criminal defence lawyer in the mid-2000s when he was one of the few racialized, turbaned attorneys at the courthouse in Brampton, Ont.

Born in east Toronto and raised in Windsor, Ont., after an early childhood in Newfoundland, Singh grew up in a family environment that was both supportive and at times frighteningly unstable.

His father, who comes from a village in India’s Punjab region where he studied on a dirt floor, rose to become head of the psychiatry department at a Windsor hospital. He also suffered from a debilitating addiction to alcohol that created a rift in the family.

“The hardest decision in my life was when I had to say, `Pops, you can’t live here anymore. You can’t live in a place where you’re hurting people,”’ Singh recalls.

“It was so complex, because when you love someone, it is also weird to also be afraid of that same person.”

Nonetheless, he cites his dad’s trajectory as “an incredible inspiration.”

“I saw him so frail that he had to walk with a walker. And now he can do a headstand,” Singh says, sipping on a kombucha.

“His story is really human. It’s not that everything was always good. He had amazing highs and amazing lows, but he came back.”

Singh, whose wife, Gurkiran Kaur Sidhu, is expecting their first child, has faced his own ups and downs.

In elementary school he dealt with racism and confronted bullies with words and fists, his younger brother said.

The elder Singh’s first stab at federal politics following pro bono work in support of refugees and migrant workers saw him lose in the former riding of Bramalea-Gore-Malton in 2011.

But overall, Singh’s achievement chart has notched upward, fuelled by a sense of empathy-infused social justice.

He tapped that resource as a member of provincial parliament between 2011 and 2017, and more recently as federal party leader, to sound off on affordability, universal pharmacare and a tax-the-rich populism.

Years earlier at York University’s Osgoode Hall Law School, he embraced the Socratic side of the lecture hall and a more structural view of social ills.

“He had very definite ideas about the problems with the way the law currently functioned and the necessity of changing those. And in the space of criminal law, I think a lot of that was about police behaviour and over-policing and racism,” said Sonia Lawrence, an Osgoode professor who taught Singh in her first-year course.

Less interested in legal minutiae or the “strict, black-letter rules of law,” Lawrence said Singh projected a “big personality” that took up space but also invited dialogue and accommodated divergent points of view.

The two connected via socially conscious hip hop as well, from A Tribe Called Quest to Jay-Z.

“Organize the wealth into a socialist economy, A way of life based off the common need,” Singh riffs at the coffee shop, quoting the lyrics to “Police State” by Dead Prez.

He continues to blend rhythm and righteousness on social media, where the Burnaby South MP has an outsized presence. One TikTok post last month encouraging young people to vote as Singh grooves to a viral remix garnered 6.2 million views.

“How I became aware of him was through his social media presence, TikTok especially,” said Ezra McCaveney, 23, who asked Singh for a selfie outside the cafe.

“He cares about the next generation, right?”

“He knows how to target us,” said Mathios Felmina, 26, after a short chat on cuisine with the country’s top New Democrat. “It’s super impressive that he actually knows how to cook injera, which is my cultural meal” — a spongy, fermented flatbread common in Ethiopia and Somalia.

Singh has developed beyond the butchered veggie dogs he served his baby brother more than two decades ago. Whether the electorate’s view of that compassionate older sibling has evolved to hand him more than the 24 seats now in NDP hands will be decided at the ballot box on Sept. 20.

Jamie Lee Curtis and Christopher Guest’s Advice For A Successful Relationship Is Just Two Simple Words
When You’re The Girl Who Feels Too Much
Interabled Couple Gets Married Despite Naysayers, Proving That Love Is For Everyone
When You’re Becoming a New You: 3 Lessons to Help You on Your Journey
If it was easy then it wouldn’t be life (Life Terms Official Music Video)