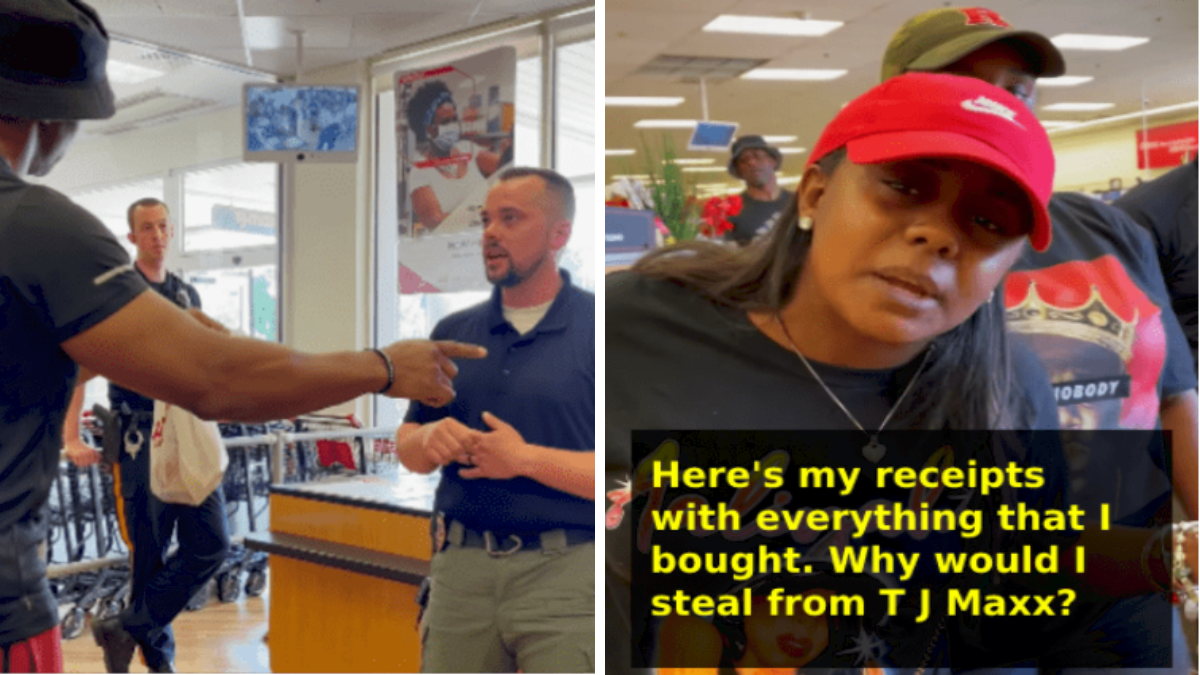 After spending nearly $300 at TJ Maxx, two women returned their items and vowed never to shop at the store again when a plainclothes police officer accused them of shoplifting without any evidence.

The women were wrongly accused

In a series of TikTok videos that now have millions of views, two women were stopped from leaving a TJ Maxx by a plainclothes cop who accused them of shoplifting.

“He gonna stop us outside and say somebody called on us that we were suspicious,” one of the women said, as reported by The Daily Dot. “So I came back in with my receipts and everything on it that I bought my sh*t. Why would I steal from T.J. Maxx?”

Inside the store, a cashier checked to see that all the items were on receipts, and determined that, yes, they all were.

“I walked out of a store after paying my money I worked hard for, and you stopped me,” one woman says in the video, adding that they spent nearly $300 at the store.

Defending his story, the white copy said a Black employee from the store had tipped him off, but couldn’t identify who that was. He then tried to question why they have multiple receipts, but another man ridiculed this assertion, saying that it is perfectly legal, and understandable, to have multiple receipts for multiple purchases in one bag.

But for the women, this was not a ridiculous thing to say. They explained how embarrassing it is to be publically accused of shoplifting, and said that they were stopped because they’re Black.

According to a study out of New York called “Shopping while Black,” their feelings are shared as 80% of Black people surveyed said they’ve experienced racial stigmas and stereotypes while shopping.

“We Black. We suspicious,” one of the women says in the video while leaving the store.

In a third and final video, one woman vows never to shop at TJ Maxx again.

“Gillette got no Black people going to jail today that got my last name on it,” she said. “Racial profiling—this is what this is, and we returned every f*cking thing. They’ll never see me again.”

In the comments, TikTok users called out how wrong the cop was for stopping them after they left the store and said they should considering suing the company.

“Y’all have every right to be angry. That is humiliating especially when you work hard for your money. Hope y’all get compensated somehow,” said one comment.

A spokesperson for TJ Maxx told The Daily Dot they “are extremely disappointed and saddened that this occurred in our store.”

“We can confirm that the plainclothes detective and police officers seen on this video do not work for our company, and that the Associates working in our store did not initiate these actions. Involvement from our Associates was at the direct request of law enforcement,” they said.

The cop’s thinking is clear here. As long as the women are proven innocent, then accusing them of shoplifting is no big deal, right?

Being accused of shoplifting is embarrassing, as is being pulled over for no good reason other than looking a certain way.

This deep-seated racism needs to be reflected on and addressed because it is not acceptable to treat people this way.

Props to those women for taking this video in the moment and helping to expose the ugly face of racial profiling.

What’s Really Important: 3 Things I Realized When I Lost My Grandmother
Police Officers Take Care Of Sick Mom’s 5 Kids When She Went To The Hospital
Like It Or Not This Is The Truth! (You Are Self Made) Motivational Speech
Afraid to Say No Because You Might Miss Out on a Big Opportunity?
What Creates Anxiety and How We Can Heal and Ease Our Pain