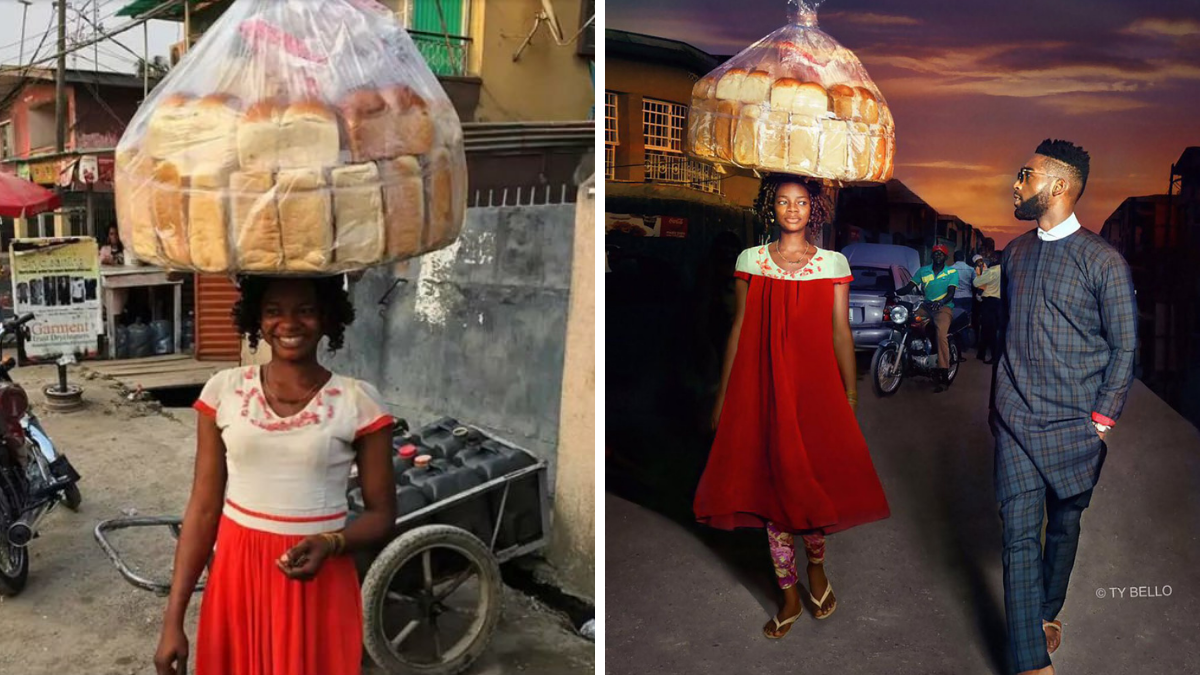 For Olajumoke Orisaguna, life was a challenge. She had to leave her husband and village to earn money for her two young children, but it turned out the move to the big city was worthwhile — and we’re not talking about her work as a bread seller.

Spellbound by a bread seller

British rapper Tinie Tempah was in Nigeria doing a photoshoot on the street with photographer Ty Bello when something incredible happened. During the shoot, a bread seller found herself in the photograph and the photographer was spellbound.

“The moment didn’t look special at all,” Bello wrote on Instagram, according to Huffington Post. “If anything she stood there a little confused.

“Some people asking her to leave the set and others asking her to stay. I signaled [to ask] if it was ok to take her photograph and she agreed, and I pressed on my shutter so she could move ahead.

“I was wrong to have paid her such little attention. Every frame with her in it was perfect.”

A beauty with perserverance

“Who is she?” Bello wrote on Instagram. “Everyone has been asking if this lady is a model… It was a perfect coincidence… She just happened to be walking by while I photographed. It happened so fast.”

Finding her proved a challenge, but someone managed to track her down.

It turned out that the woman in the photograph was Olajumoke Orisaguna, a 27-year-old mother, wife and hair stylist from Ire in Osun state. Orisaguna wasn’t making enough money in her village so, upon the invitation of a distant relative to work at a bakery, she moved to Lagos to earn money for her family as a bread seller.

“As I listened to her I wondered if the beauty I had seen on my screen as I edited my image was a fluke… well until she smiled. I realised that I was wrong. I had in fact, underestimated the beauty of this 27-year-old woman,” Bello wrote on Instagram.

It turned out that Orisaguna was born to be a model, and lit up the frame with her radiance.

“As always it was her eyes and of course her perfectly chiseled features that jumped out at you when she chuckled. This lady belonged in front of my camera,” Bello said.

So Bello photographed the woman and her photos ended up on the cover a Nigerian magazine called This Day in Style.

“She stepped in front of my camera and I almost couldn’t recognise her,” Bello said of the shoot. “She moved different too. Jumoke looked straight into my lens emoting like she had done this all her life.

The story of Orisaguna’s discovery was as incredible as it was unlikely — what are the chances that a photographer would be shooting in the street and have that much faith in your stardom? But sometimes Hollywood level discoveries like this happen in real life, proving that sometimes, the most amazing things can happen when you least expect them.

How To Create The Life You Want To Live | Jordan Peterson Motivation
Afraid to Say No Because You Might Miss Out on a Big Opportunity?
What Creates Anxiety and How We Can Heal and Ease Our Pain
You Never Know What God Has In Store For You, But It’s Always Better Than You Think
After 22 Years, Man Marries The Woman He Thought He Had Lost Forever As A Teen