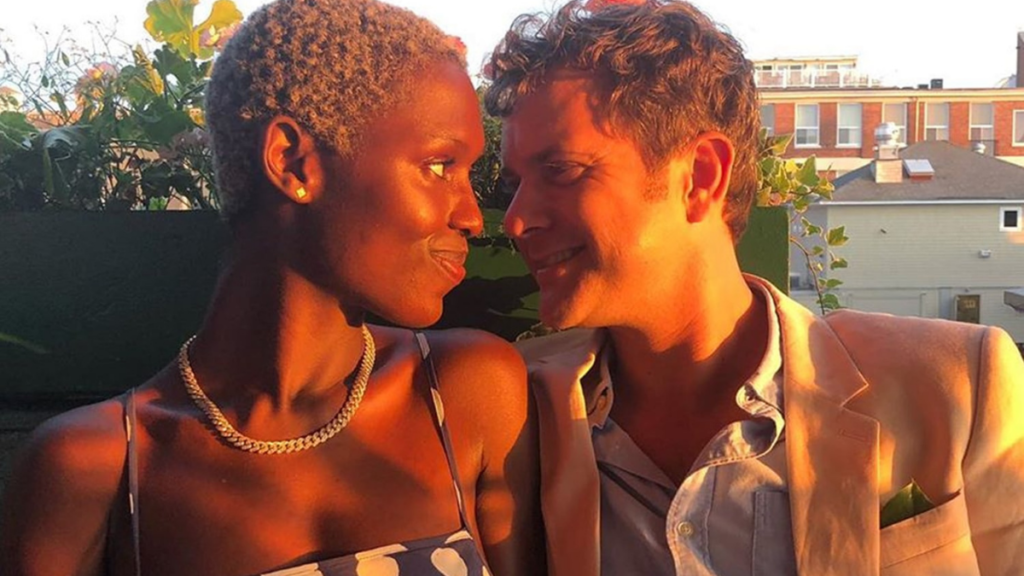 Joshua Jackson famously spoke about the struggles of modern dating back in 2016 when he stopped by The Ellen DeGeneres Show and admitted that becoming single after a 10-year relationship was anything but easy. Jackson and longtime partner Diane Kruger had parted ways in July 2016 and, as he pointed out, “Things have changed a little bit since last time I was single.” Lamenting that “everything’s in your phone now,” he continued, “There’s no more talking to people anymore. You talk to someone and they’re like, ‘Oh, no, no, no, no. We don’t do that anymore.’ So it’s been quite a big change!”

It’s not surprising then that he met his future wife, model-turned-actress Jodie Turner-Smith, the old-fashioned way: at a party. But as it turns out, they didn’t actually plan to embark on a serious relationship. Three years later, they’ve tied the knot and started a family, proving that you really never know when someone special will enter your life and enrich it.

Here’s what we can learn from Joshua Jackson and Jodie Turner-Smith’s surprise romance:

Joshua Jackson and Jodie Turner-Smith have done an impressive job of keeping their love life under wraps, only giving fans small glimpses into their personal life. But in the little they have shared, they’ve revealed a few key lessons about what makes their union work.

For one, they know how to have a good laugh. Sitting down on Late Night with Seth Meyers in May 2021, Turner-Smith recounted the first time she met the Dawson’s Creek alum and it sounds like a scene straight out of a rom-com. Turns out, they were at a party when she noticed the actor from across the room and decided to play it cool. “I saw him before he saw me and when I saw him, I was like, ‘I want that,’” she recalled. “And then when he saw me, I just pretended like I didn’t see him.”

Luckily, that didn’t deter Jackson who had the perfect icebreaker ready. “I was wearing this T-shirt from a movie called Sorry to Bother You [in which] Tessa Thompson plays a character called Detroit and she has this T-shirt that says, ‘The future is female ejaculation.’” That’s the exact shirt Turner-Smith was wearing to the bash “and so he shouts across the room, ‘Detroit!’” Then “he comes over and does this really cute, charming thing that he does and just all night— he just basically followed me around the party,” she recalled.

Needless to say, she didn’t mind, but she also didn’t make too much of it. Proving that you can never really anticipate a special connection, Turner-Smith laughingly admitted, “When I first met my husband, we had a one-night stand. We’re in a two, three-year one-night stand now,” she joked.

Meeting the right person at the right time isn’t a given and Joshua Jackson and Jodie Turner-Smith are actively appreciative of the fact that their paths crossed when they did. Speaking with People in April 2021, Turner-Smith shared how they never take their connection for granted. “We high-five each other all the time about how great we chose. We’re like, ‘You did a great job choosing,’ and then we’re like, ‘Yeah, you too,’” she quipped, gushing, “I think it’s really beautiful to be with someone who is so supportive and so loving. We’re so similar in so many ways,” she continued. “We’re like mirrors for each other. And I just really love that human being.”

She wasn’t kidding! Jackson has shown the world just how supportive he is on numerous occasions, like in June 2021 when the actor took to Twitter to praise his wife’s modeling work, writing, “Can I just take the moment to not that my wife has been absolutely smashing the photoshoot game this year.” In keeping with their shared sense of humor, Turner-Smith didn’t thank her hubby for the sweet sentiment, but rather corrected his typo, tweeting back, “note* @VancityJax.” “Spelling or no. I’m not wrong,” he fired back.

I think it’s really beautiful to be with someone who is so supportive and so loving. We’re so similar in so many ways. We’re like mirrors for each other. And I just really love that human being

The Little Fires Everywhere star has also always been there to support his wife’s career. Turner-Smith, who started as a model and got her first big acting break as a lead in 2019’s Queen & Slim, told People that she loves talking shop with her man. “He has a wealth of experience to offer and advice to offer that’s based on experience. And I love that,” she enthused. “I just love picking his brain about things.” Plus she teaches him a thing or two as well. “I’m somebody who’s just beginning. So that energy of someone who’s just beginning, that excitement, that just everything and anything is possible, I think that I really inspire him with that,” she told the mag.

Their love grew quickly, but it wasn’t easy

Joshua Jackson and Jodie Turner-Smith were first rumored to be dating back in November 2018 when they were spotted holding hands in Los Angeles. One source told Us Weekly that they had actually attended Usher’s 40th birthday party together the previous month and that “they were all over each other. Super smitten and gazing into each other’s eyes as they danced together their whole night,” the insider revealed.

While the pair didn’t openly confirm nor deny the reports, they did give fans a few hints that their relationship was going well. In August 2019, for example, Turner-Smith shared a snap of her and Jackson lovingly gazing into each other’s eyes and wrote, “Two people who only fancy each other a little bit.” They finally went red carpet official that November and immediately sparked marriage rumors by sporting rings on their wedding fingers. According to Daily Mail, they obtained a marriage license in Beverly Hills in August 2019, and in December 2019, it was confirmed that they had indeed tied the knot in total secrecy. Although, when The Sunday Times asked Turner-Smith about their nuptials in February 2020, she played it coy, saying, “I haven’t said to anybody, ‘Yeah, we got married.’ People are assuming whatever they want, but when people tell me ‘Congratulations,’ I say ‘Thank you,’” she teased.

Why so much secrecy? It turns out, they’ve been subjected to some terrible scrutiny. As she told the outlet, although they were sure about their connection, others weren’t. “There was this wave of people who were upset that I was possibly married to a white man,” she revealed, explaining, “In America, interracial dating or marriage is not something that is as accepted. Certain people feel strongly against it, in both communities. I felt it from the Black community,” she admitted. Adding that “it is so complicated,” she hinted at why they’ve chosen to be so secretive about their relationship, saying, “I’m learning there are certain things I have to really keep for myself.”

Joshua Jackson and Jodie Turner-Smith are “obsessed with each other”

In April 2020, Joshua Jackson and Jodie Turner-Smith grew their family when they welcomed a baby girl, but that too came with its difficulties. For one, there was the pandemic. Speaking with Good Morning America in March 2020, Jackson admitted, “It’s a bit stressful right now and we’re just trying to figure out how to be smart about being quarantined. The medical system right now is a little bit difficult, so we’re figuring it out day by day,” he said. He also told Live with Kelly and Ryan they were “just trying to figure out […] how to get through this with our sanity.”

In the end, the delivery went smoothly, but as Turner-Smith shared with The Sunday Times, that wasn’t their only concern. “The racial dynamics over here are fraught,” she said of the U.S. “White supremacy is overt. It’s the reason I don’t want to raise my kids here. I don’t want my kids to grow up doing active shooter drills at school,” she continued. As for England, where she was born, she said that it too had “gone off the rails […] so I was thinking maybe Canada,” seeing as Jackson hails from Vancouver.

But through all the tough times, their devotion has never wavered and they’re as “obsessed with each other” as ever. So much so that Turner-Smith admitted she actually watches her husband’s old films when they can’t be together because of work. “I do it whenever we’re apart because I miss him so much,” she confessed, adding, “He loves that I am obsessed with him!”

Their obsession is especially clear on Instagram. In February 2020, she celebrated their second Valentine’s Day as a couple by gushing that “it’s even more magical than the first” and shouting out “the man who sees my soul and holds my heart.” She’s also called him her “soulmate” and “#1 daddy,” writing, “Us girls are so lucky to have ya.”

White supremacy is overt. It’s the reason I don’t want to raise my kids here. I don’t want my kids to grow up doing active shooter drills at school

Jackson, on the other hand, prefers to pen longer captions. Much longer. In May 2020, he celebrated Mother’s Day with a heartfelt (and very lengthy) letter to his wife, thanking her “for being the light that you are. For the passion with which you threw yourself into nurturing and protecting our child when she was in your womb. For the dedication and will you showed bringing her into the world,” he gushed, adding, “Thank you for the depth of grace you have found since our daughter has arrived. The commitment that you make look so effortless but I know is anything but. Thank you for making me a father. For trusting me enough to embark on this journey together.”

He was back at it again in celebration of his wife’s most recent birthday in September 2020, this time thanking her “for choosing to share your light with me. Thank you for walking this path of life as my wife. Thank you for bringing our daughter into the world,” he wrote, concluding, “This last year has been the happiest whirlwind of my life. I can’t wait to see what all the years to come bring our way.”

Joshua Jackson and Jodie Turner-Smith show us the importance of living life in the moment and embracing it as it happens. While they weren’t actively seeking out a connection when they met, they were open to it and so, they were able to quickly realize they had something special and they embraced it, becoming unabashedly “obsessed” with one another.

Woman Loses Engagement Ring In Homeless Man’s Change Cup – He Returns It
How I Stopped Resisting Change and Embraced the Road Ahead of Me
After 22 Years, Man Marries The Woman He Thought He Had Lost Forever As A Teen
You Never Know What God Has In Store For You, But It’s Always Better Than You Think
Podcast: How to say no (and what to say no to)