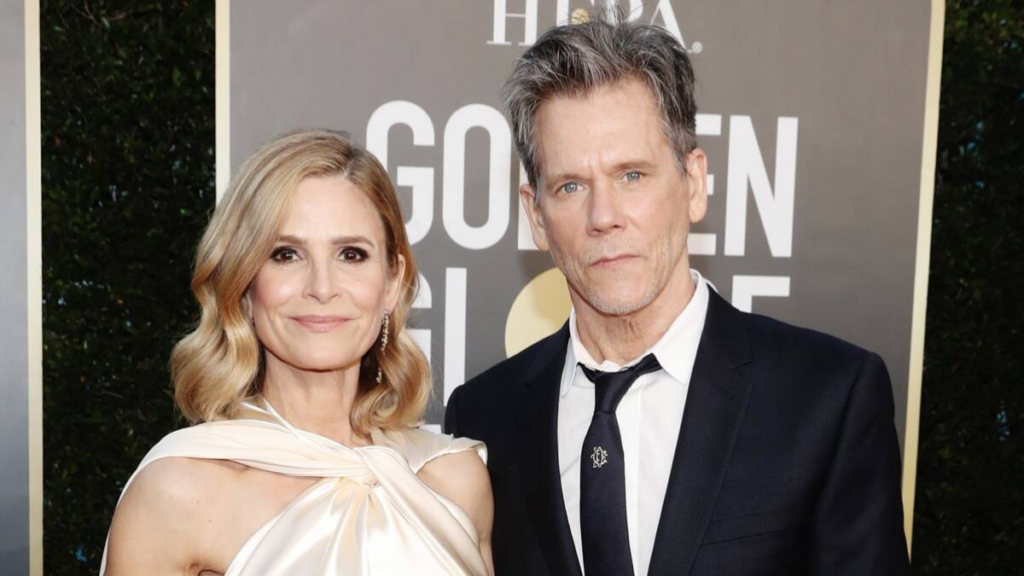 Kevin Bacon and Kyra Sedgwick are a rarity in Hollywood. Their 32-year marriage would be impressive by any standards, but the actors have managed to balance two successful entertainment careers with a surprisingly down-to-earth family life. The pair met in 1987 on the set of Lemon Sky, tied the knot that September, and welcomed their first child, son Travis, in June 1989. Their romance moved fast and they grew their family with the arrival of daughter Sosie in 1992 and, over three decades later, they’re still making it work. Their union hasn’t been without its challenges — they once had a fight that lasted six months — but they’ve always managed to figure it out. However, what’s perhaps most surprising is the fact that their key to relationship success is super simple and super real.

Here’s what we can learn from Kevin Bacon and Kyra Sedgwick’s perfectly imperfect union:

It may have been Lemon Sky that sparked Kevin Bacon and Kyra Sedgwick’s decades-long romance, but as the actor revealed in 2014, they actually first met in the ‘70s. One day, Bacon wrapped up a play and went into a nearby deli for lunch, which is where he crossed paths with a 12-year-old Sedgwick! “A little girl was in there who had just seen the matinee and her brother said, ‘You liked that actor, go tell him you liked him,’ and it was Kyra,” he recalled of the serendipitous encounter.

The second time they met, the aspiring actress was 21 and although they were better suited for each other age-wise, she wasn’t convinced. “He’s really cocky and he thinks he’s so cool,” she told Piers Morgan in 2012. But Bacon, who is seven years her senior, felt an instant connection. “I found her, you know, really very beautiful and sexy and aloof,” he said, revealing, “I was just immediately in love with her and she was just immediately put off by me.”

I had no great role models in terms of healthy marriages, but I knew in my heart and soul that he was the right person

Bacon did his best to change her mind, like repeatedly taking the entire Lemon Sky cast out to eat, hoping she’d attend. She never did, but Bacon persisted, and eventually, she agreed to dinner. After that, it didn’t take long for her to realize what her co-star had known all along. “I had no great role models in terms of healthy marriages, but I knew in my heart and soul that he was the right person,” she told Good Housekeeping in 2010. “It was an unquestionable truth of mine. I’ve never had anything like that before or after.”

Balancing family with a career is never easy and, as Kyra Sedgwick admitted to Glamour, becoming a mom meant putting her acting on hold. “I worked a lot less when the kids were younger,” she said, noting, “I think you just make your priorities and sometimes they put restrictions on you that hurt a little bit, and that’s okay.”

The tough decision to place her career on the back burner was made a little easier by the fact that she had a supportive partner who never took her sacrifices for granted. “She’s made a lot more sacrifices than I’ve made,” Kevin Bacon told he mag, conceding, “In many cases, because of the kids, she would make decisions careerwise that weren’t the best for her career.” He recognized and appreciated her selfless dedication to their family and so when the role of a lifetime came knocking for Sedgwick, he pushed her to refocus on work. “When [2005’s] The Closer came along — I don’t even look at this as a sacrifice — but the kids were still in high school or junior high and she had this opportunity to go out to California and to be a lead in a TV show,” he shared. “I said, ‘Listen, I’ll stay with the kids.’ In this case, this was the first time in our lives I said, ‘I’ll stay home, I won’t take anything.’”

And he hasn’t stopped encouraging her to pursue her passion since. When Sedgwick was presented with the chance to direct for the first time with 2017’s Story of a Girl, he rooted for her to say yes. “For years I encouraged Kyra to direct, because I really thought she’d be great at it and would enjoy it […] so I just kept saying to her, ‘I know you can do this,’” he shared. It’s that unwavering support that gave Sedgwick the confidence to tackle the project. “It really is amazing that he saw in me something that I just didn’t have the confidence to wrap my arms around. It really wouldn’t have happened unless he kept pounding the table,” she told Glamour, adding, “I feel like it’s something I’ve always been meant to do, and he saw that before I did. I think that’s amazing.”

On a lighter note, Bacon also never took for granted the fact that his wife stuck by him through some questionable humor. As he joked with People in 2017, “I was watching videotapes of our family from the early ’90s [and] hearing me making these cheesy jokes from behind the camera, I said to my wife, ‘When I look at those tapes and hear the things coming out of my mouth, the fact that you have stayed with me is truly heroic.’”

Their relationship may appear picture-perfect, but it’s as real as it gets. All couples face ups and downs and disagreements and Kyra Sedgwick and Kevin Bacon are no exception. Getting candid with Glamour, the actress shared that “the biggest fight we ever had was when I wanted to move back to Manhattan and he wanted to stay in Connecticut. That was a big one, and it lasted a long time.” Six months, to be precise. As she told Good Housekeeping, “We have had our bumpy patches.” Elaborating on the lengthy argument, she revealed that it was 1995 and they were living in a rural Connecticut farmhouse, but she “needed the pulse of the city. My mental health was at stake,” she admitted. Eventually, they did move back to New York and they “got through it just by knowing that no one was going anywhere.”

But fighting is an exception for them, not the norm. “We’re not one of those volatile, mercurial couples. We get cranky, but our fights usually don’t last very long, and they’re rare,” Sedgwick told the mag while sharing with Glamour that it’s also important to never “hit below the belt.” Meanwhile, Bacon also pointed out that how you approach a possible issue is key and they strive to have a positive attitude when solving roadblocks. “We don’t start with ‘No,’” he said. “It’s kind of the opposite. If something comes up, we mostly say, ‘This is our lives; we’ll make it work.’” He elaborated, “If something comes up, we talk about it, but not from the ‘Oh, s***, you can’t go away. You can’t go to Australia for three months.’ That’s not the place we start.”

Most recently, the pair put their own advice to good use to get through the challenges of lockdown. Getting candid, Bacon told Jimmy Fallon (via People) how he and his wife “realized that we’ve been married for a really long time, and quarantine really was an amazing, kind of, test for our marriage because, I mean, we were really isolated. I think after a while we realized that we would kind of have to, even in our place, go away from each other,” he revealed, recalling, “So we would have breakfast, then she’d basically go to the bedroom, which we called the lair, and she spends a lot of time in her lair. Then she’d text me and say, ‘Do you wanna do lunch later?’ and I’d say ‘Sure’ and you know, we’d meet in the kitchen, and then she’d go back to the lair.” They’d keep that routine going all day. “And, again, you know, drinks, maybe dinner, whatever,” he continued. “And then we’d get back together in the kitchen and do the same thing all over again.”

According to Kevin Bacon and Kyra Sedgwick, there’s no grand secret to marital success

Kevin Bacon and Kyra Sedgwick have been together for over three decades and yet, they don’t believe there’s any grand secret to a successful relationship. Rather, they’ve spoken openly about their sheer luck in love, as well as the importance of the simple things that can really make a difference.

When Redbook praised the couple’s long-lasting romance back in 2012, Sedgwick was quick to brush it off. “People say it’s this fairytale thing, but it’s life. We just love each other a lot,” she said, adding, “When we’re on the red carpet and we get the ‘How do you guys do it? No one can stay together,’ I get really irritated. I don’t think our relationship is more or less difficult; I just think you both make the commitment and you make it work,” she proclaimed.

If someone had told me when I was 21 that I was going to be married and have a kid by 23, I would have told them they were out of their minds because I was very ambitious, I was very independent. And then suddenly I met this person and it was like, well this was it.

That being said, there are a few important things they focus on, like intimacy — “Sex is really important” — and self-love. “There has to be some piece of wholeness that is within yourself before you can let somebody love you the way that you need to be loved,” Sedgwick told People. What’s more, “the marriage has to be the top priority,” but at the end of it all, the biggest thing you need is a dose of luck. “Relationships are such a mystery,” the actress told People in 2020. “Why do they work? Why do they not work? It’s just a total crapshoot. But that’s the aha moment: Nobody has the answers,” she said, adding that she and Bacon “just got lucky. I honestly believe that’s the truth.”

It’s a sentiment she also shared with New York Post in 2021, saying, “Honestly, we just got lucky, there’s no secret.” Taking a walk down memory lane, she noted how easily and unexpectedly things can change in the blink of an eye, for better or worse. “If someone had told me when I was 21 that I was going to be married and have a kid by 23, I would have told them they were out of their minds because I was very ambitious, I was very independent,” she admitted. “And then suddenly I met this person and it was like, well this was it.” When it comes down to it, however, “We’re just really lucky, and it’s not hard.”

Yes, all relationships require work and there will always be disagreements, but as these two show us, a solid union should feel effortless and rewarding with both parties secure in the knowledge that whatever comes their way, they’ll be able to tackle it together and come out unscathed. A little sprinkling of luck doesn’t hurt either!

Read This If You Are Searching For Motivation
Man Finds Out Cab Driver Has Never Been To Amusement Park So He Invites Him
Podcast: How to say no (and what to say no to)
If You’ve Been Abused and You’ve Lost Your Joy and Sense of Self
Hack Your Brain For Maximum Productivity | Jim Kwik Study Motivation