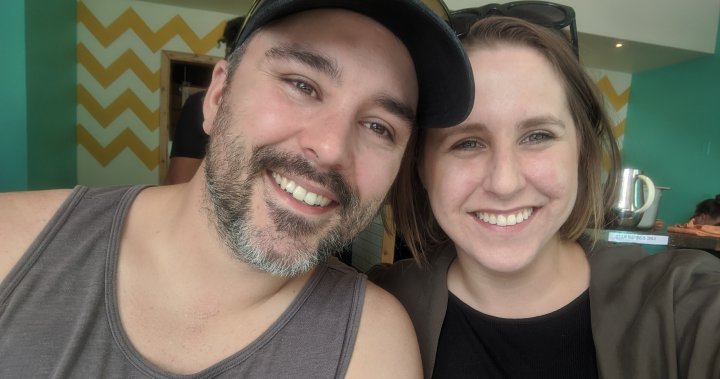 Emily Pilon is optimistic she will get married on the date and at the venue she and her fiance, Chad Pynch, had originally chosen. But after the COVID-19 pandemic repeatedly scrambled the couple’s wedding plans, that’s just thanks to a lucky coincidence.

“The plans have changed … a dozen times since we started planning the wedding a year ago,” says Pilon, a digital marketing and engagement professional based in Hantsport, N.S. “It’s been a lot of making sure that we have Plan A through F.”

The couple, who started planning for their wedding in November 2020, had initially envisioned a small gathering at a nearby vineyard. When it looked like pandemic restrictions would make it impossible to elope there, Pilon and Pynch started planning for a backyard ceremony, only to scrap those plans when the province imposed a cap of 10 people on private gatherings. As COVID-19 restrictions evolved, the couple’s wedding script kept switching between the vineyard and backyard option, Pilon said.

Eventually, it was a serendipitous cancellation that allowed Pilon and Pynch to re-book the vineyard for Oct. 16, the Saturday the couple had initially selected for their big day.

But the wedding costs will likely go beyond the $15,000-limit the couple had initially hoped to stay comfortably under, Pilon says.

“What (the budget) was initially and what it is now — it’s kind of exploded,” Pilon says.

Read more:
Ready to tie the knot in summer 2021? Here’s what to expect for the wedding season

As vaccination rates soar and COVID-19 regulations loosen up, a pandemic weddings backlog has couples clambering to secure venues and, often, struggling to contain costs as supply shortages push up prices for anything from ivory-coloured chairs to floral decor.

Couples who had planned to tie the knot in 2020 but were forced to postpone those plans are now hoping to finally get married in 2021, says Toronto-based wedding and event planner Rebecca Chan. But so are those who got engaged during the pandemic, she adds.

“It’s almost like this double cohort of all the people who’ve had to reschedule, and on top of that, the new inquiries all booking and vying for the same dates,” Chan says. “It’s a little bit wild right now.”

“From a vendor standpoint, prices have skyrocketed,” Wood says, although companies aren’t always passing on those costs to consumers.

The shortages are especially acute when it comes to flowers, Chan says. Several flower farms scaled back production as demand for fresh flowers dropped during the pandemic and haven’t been able to ramp back up quickly enough, she adds.

“We are not getting the kind of variety and price points that florists would usually get on the wholesale level,” she says.

Pilon has felt the impact of the floral supply bottleneck first-hand. Her budget for flowers is now roughly $100 higher than she had originally planned, and she had to settle for whites, green and pale pink tones for the floral decorations instead of the burgundy colour she had initially envisioned.

But perhaps the most sought-after piece of wedding-related equipment right now is outdoor tents, Wood says. With most couples planning outdoor weddings, customers are looking for canopies to host al fresco receptions, he adds. But in Ontario, where only patio dining has been allowed so far, brides and grooms are competing against restaurants for the same limited supply of tents, he says.

Pilon ran into the tent dilemma as well. When she inquired about renting one to use at the vineyard, she says she was shocked by how much it would cost. It was then that, to stay within budget, the couple started thinking about having the celebration in their backyard instead. Luckily, under the current provincial regulations, the couple will be able to hold the reception in the vineyard’s dining room with a limited number of guests.

Wood’s advice for couples hosting their wedding outside is “definitely put down (a) deposit and book the tent.”

In general, though, customers should take extra care to read the fine print about deposits and refunds, he adds.

As Global News and other media outlets have reported, many couples lost thousands of dollars in deposits over wedding cancellations in 2020 while others were forced to postpone their wedding dates to preserve their deposits instead of getting their money back.

While prices for some wedding rental equipment and flowers are climbing, that’s not yet the case for many venues, Chan says.

After a brutal 15 months of the pandemic, many venues are offering wedding packages at reduced rates just to get business in the door, she adds.

“There are still deals to be had,” she says.

But that’s if you’re ready to get married in 2021. Starting in 2022, venues are going back to their regular rates, Chan cautions.

Read more:
A COVID-19 love story: Meet a Canadian bride and her U.S. husband who got married at the border

That’s the case at Wedding in the Woods near Windsor, Ont. The spa resort, which offers rustic weddings on 30 acres of woods, is already booked for every weekend from the last week of April to November 2022 and already taking reservations for 2023, says owner Jordan Goure, who also runs BREW, a local microbrewery, with his brother.

But the company is sticking to its reduced pandemic pricing for 2021, as it continues to hold wedding parties at reduced capacity, Goure says.

Pilon says her venue costs are now higher than initially budgeted, even though she’s getting married where she had originally planned. That’s because the couple will now have to book the entire space since the vineyard won’t be able to host other guests at the same time.

Still, by keeping their wedding frugal and the guest headcount to 35, Pilon and Pynch are still managing to limit costs. And while she says at one point — after the umpteenth wedding-planning upset — she contemplated getting married at the courthouse, she’s glad now that her wedding is finally taking shape.

“I am looking forward to it now because it will be beautiful.”