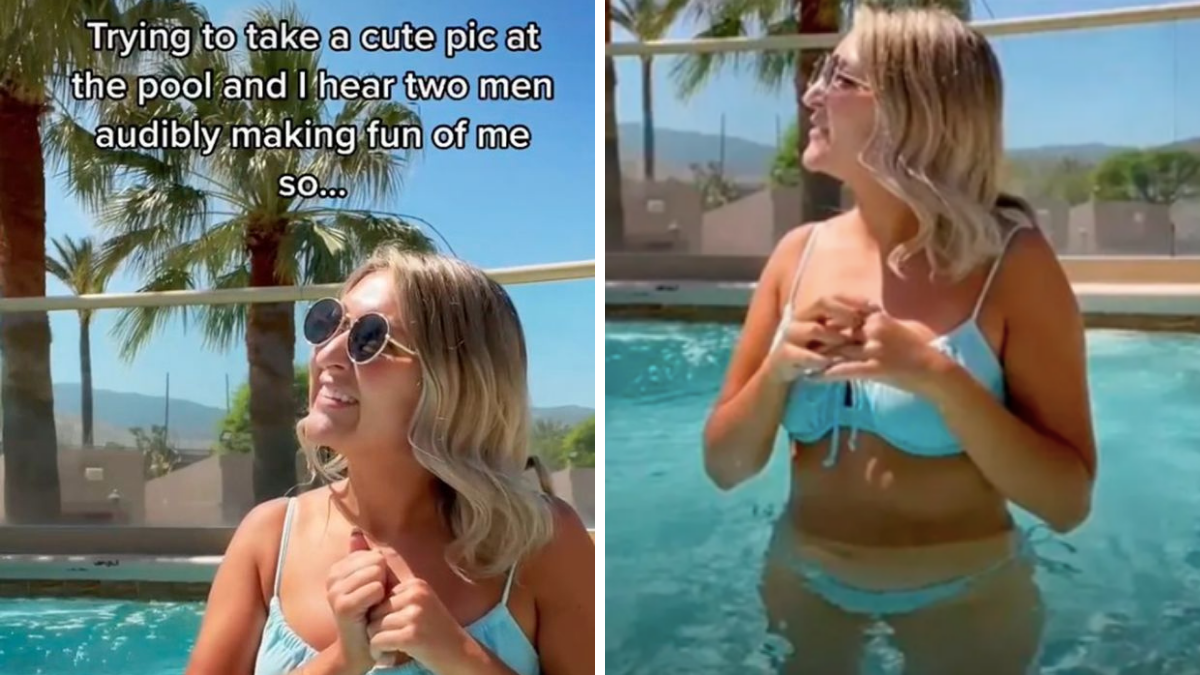 Taking photos by a pool was apparently something two guys thought was worth making fun of, but instead of backing down, this TikToker “killed them with kindness.”

She was taking photos on a pretty day

TikToker Samantha Longton was posing for photos in a pool on a gorgeous day when she overheard two men mocking her.

“Look at her,” one man said to the other, “this is what’s wrong with girls.”

Then, they posted up beside a slide and started laughing and shaking their head at her — but they didn’t expect the response she was about to give.

Instead of letting the guys make her feel bad about taking photos, she clapped back, addressing them in a polite yet confident manner.

“Do you guys want to take one, too,” she asks the men.

“What, babe,” one of the guys responds, rudely.

One guy says, “Oh, yeah,” but they didn’t really mean to accept and started to leave.

The two men walked away, but their rudeness lives on in a TikTok video that has received over 10 million views.

Im not a confrontational gal but sometimes men just …. ##fyp

In the comments for the first video, Longton got an outpouring of support.

“I can feel the bad b energy radiating from here,” one wrote.

“QUEEN the condescension in ‘next time’ and everything ab this is so good,” another wrote.

Another said her attitude was reminiscent of Elle Woods, the protagonist in Legally Blonde played by Reese Witherspoon.

“I think this is what my mom meant by ‘kill them with kindness,’ said commenter Ariel Hernandez.

TikToker users also shamed the men for calling her “babe” and being just plain rude.

“What pathetic manchildren make fun of a gorgeous person living their best life?? SAD,” said another user in the comments.

Longton also posted a longer video of the complete interaction.

The internet had her back

Men shaming women is, sadly, nothing new. It’s been happening for a long, long time. What is new is that women like Longton now have legions of supporters online who have their back, and who know that this behavior is simply unacceptable in 2021. See, social media isn’t all bad.