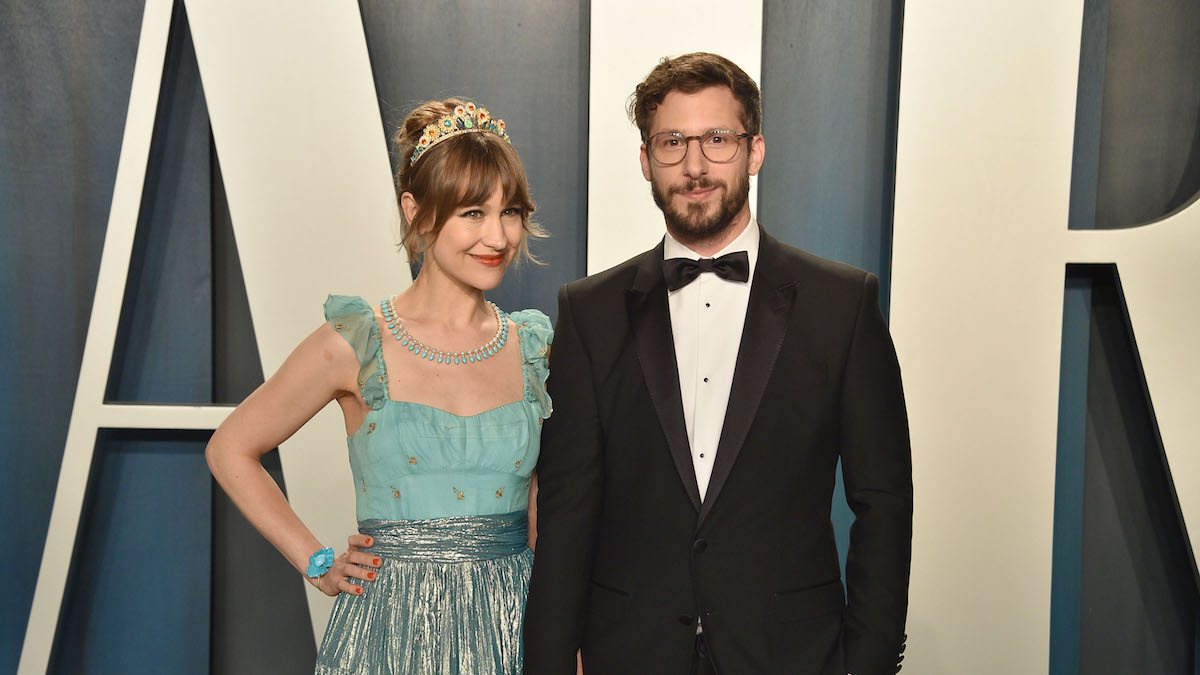 Andy Samberg is a comedy powerhouse. Whether performing on SNL, starring in Brooklyn Nine-Nine, or singing with The Lonely Island, the California native sure knows how to make audiences laugh. But despite his popularity, not much is known about the comedian’s personal life — and that’s on purpose.

Samberg has been happily married since 2013 and is a proud dad of one. “It’s been the best thing that’s ever happened to me,” he told The New York Times of becoming a father. Calling it “a beautiful, incredible dream,” he gushed, “It has surpassed every expectation I ever had. It’s definitely been very blissful.” So what do we know about Samberg’s wife, Joanna Newsom? As it turns out, she’s also a California native who’s passionate about music, although her tracks are very different from her hubby’s.

Who is Joanna Newsom?

If you think of popular instruments, the harp likely isn’t at the top of that list, but Joanna Newsom has been obsessed with it since she was a child. The singer-songwriter, whom Rolling Stone once called an “indie heroine and proud weirdo,” has been dubbed “the best-known harpist in American indie music.” She first became intrigued by the harp at age four, but didn’t truly discover her calling until she showed up at Lark Camp at age 12. The summer camp, which has a mission of helping kids “learn traditional music from all over the world,” is where Newsom discovered what she wanted to do for the rest of her life.

When the camp’s harp teacher, Diana Stork, showed Newsom a way of playing the harp that was based on West African kora music, the budding young artist was hooked. “That was when I started obsessing,” she told The New York Times. As professor Stork recalled, “Joanna had a great imagination, and a beautiful lyrical sense, a very nice sense of chordal accompaniment. The one thing that I really thought I could share with her was polyrhythms.” And so she did.

Polyrhythms require the player to pluck a different rhythm with each hand and the difficult technique was just what the aspiring artist needed to challenge herself. “Everybody would be lining up for dinner at night and Joanna would still be there, alone with her harp in the woods, playing and playing, trying to get it,” Stork revealed.

When it came time for university, Newsom enrolled in Mills College in Oakland, CA to study (not surprisingly) composition, but she soon changed her focus to creative writing. As Rolling Stone noted, she eventually discovered that she could blend the two and she began writing and recording songs. When a friend happened to share some of that music with indie-folk artist Will Oldham, he was so impressed that he helped Newsom get a record deal with Drag City. She’s been with the label ever since and has released four full-length albums to date, starting with 2004’s Milk-Eyed Mender.

But while she’s sold hundreds of thousands of records, Newsom has also faced her share of criticism, which has mostly been aimed at her unique vocal style. Her voice has been criticized all-too-often for being childlike, but as the Los Angeles Times noted, the critiques “diminish the complexity and singularity of her music.” Meanwhile, NPR called her “the 21st Century’s timeless voice” and The New York Times praised her “brash singing voice,” as well as her “extravagantly literary lyrics.”

In addition to music, Newsom has another passion in common with Samberg: comedy. To date, she has amassed nine acting credits, including an appearance as a harpist in an episode of Portlandia. “She’s incredibly funny,” Samberg told iNews in 2018.

Andy Samberg and Joanna Newsom liked each other before they met

Andy Samberg and Joanna Newsom first met in 2008 thanks to a mutual friend. It all started when Newsom’s music label boss introduced her to comedian and SNL star Fred Armisen. The two struck up a friendship and, one night, Armisen showed up at one of her shows with a colleague who just so happened to be Samberg. Little did he know but Newsom was a fan. As she told Seth Meyers, “I had just been with my band backstage, like an hour before, watching Just 2 Guyz. [Samberg] has a tiny part. He plays Steve the c***,” she recalled. “So when I met him, he was kinda shy, and I said, ‘Oh my God, you’re Steve the c***!’ He always says he saw heart bubbles,” she laughed.

Similarly, she admitted to Rolling Stone that she was a fan of Samberg’s comedy “before I ever met him. I remember being on tour, watching his old, pre-SNL stuff with my band, forwarding it to friends,” she revealed.

As luck would have it, the funnyman was also a fan of hers. As an insider told Us Weekly, he “liked her music and would go to her shows” long before they got together. “He had the biggest crush on her,” the source shared.

It wasn’t long before the pair started dating and, five years later, Samberg and Newsom got engaged in February 2013 and said “I do” that September in Big Sur, CA at the Post Ranch Inn. “I liked it and I put a ring on it,” the actor joked to People. Jump to August 2017, and People confirmed that the lovebirds had become parents to a baby girl.

Since tying the knot back in 2013, Andy Samberg and Joanna Newsom have managed to keep their personal life impressively private. Till this day, they’ve not publicly shared their daughter’s name, but they have occasionally sung each other’s praises. It turns out that, over a decade after getting together, they’re still each other’s biggest fans.

“He’s my favourite person in the world,” Newsom gushed to Larry King. “He’s the person I would most want to hang out with at any given moment,” she continued, adding, “He’s probably the biggest superfan of my music.” Samberg proved that when he told iNews just how talented he thinks his wife is, saying her music “is really meaningful and she’s brilliant in a way that I feel like almost no one else is.”

When it comes to spending quality time together, the pair loves listening to music and talking about their artistic endeavors, but things have slightly changed since the arrival of their babe. Joking about how their anniversary celebrations are different now that they’re parents, Samberg told Conan O’Brien in 2017 that “the first three anniversaries were very lavish. Fancy dinner, nice restaurant, huge thing of flowers, dazzle her, go out dancing probably,” he reminisced. “And then we’ve got the baby now. So this year, I got home. I picked a single flower out of the neighbor’s garden. I walked in and I was like, ‘Happy anniversary.’ She’s like, ‘Thanks.’ And then we both passed out on our faces,” he laughed.

“With a baby, it’s all about just sitting down and watching TV with my wife at the end of the day,” Samberg told iNews. Being together matters more than what they’re doing and when the world locked down in 2020 because of the pandemic, they made the most of it. Speaking with People, the comedian shared that “a lot of these days are with the family, with my wife and daughter. Like sitting out in the sun or something, dancing in the kitchen. But I would say I feel [moments of bliss] a lot these days,” he enthused. “That’s the one true silver lining of being home bound — so much wonderful family time.”

What it comes down to for Andy Samberg and Joanna Newsom is a shared passion for music, laughter, and each other. They may keep their love close to their hearts, but their connection is undeniable. As the SNL alum told iNews, their relationship works because they’ve always supported each other and been nothing but honest. “It’s important to be with someone that you trust; someone you can laugh and be your true self with,” he noted, adding, “Those two are tied in my personal experience.”

Afraid to Say No Because You Might Miss Out on a Big Opportunity?
Read This When You Feel Like God Is Far Away
Quick-Thinking Uber Driver Gets Asked To Drive To ‘Suicide Bridge,’ Does This Instead
If You’ve Been Abused and You’ve Lost Your Joy and Sense of Self
The Jaycee Lee Dugard Story | Surviving Captivity Against All Odds | Goalcast