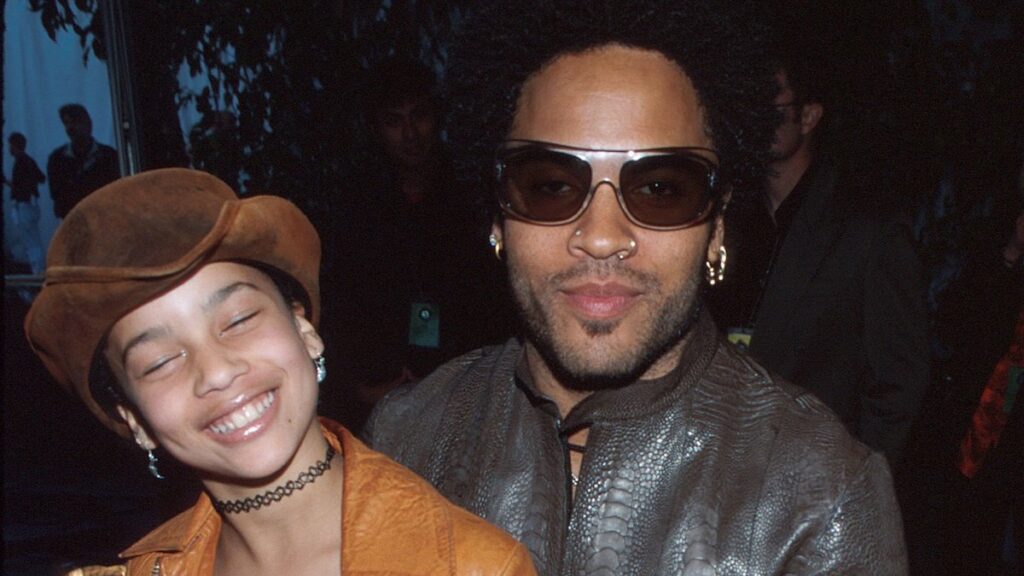 Zoe Kravitz hails from a bonafide showbiz family, and she’s not apologizing for it

Her dad is singer Lenny Kravitz, her mom is former television sweetheart Lisa Bonet, and her stepdad is Aquaman star, Jason Momoa. If that wasn’t enough, Zoe’s godmother is My Cousin Vinny actress Marisa Tomei. Having grown up in the public eye, Zoe has had to deal with a number of misguided assumptions about her upbringing, her career trajectory, whether or not she has a dysfunctional relationship with her folks.

Yet, the Big Little Lies actress continues to dispel those theories wholeheartedly. Like any other showbiz kid, she’s had to adjust, cope, and shift expectations over time. The family has had to overcome tensions, misalignments, and lifestyle clashes, but they’ve come out on the other side as a strong, united front time and again. There’s a reason why they are known as the epitome of a modern, blended family.

Here’s why we should take a few minutes to chronicle the ups and downs of Zoe’s relationship with her mother Lisa and how it contrasts with her unique bond with Lenny:

Zoe Isabella Kravitz was born on December 1, 1988, in Los Angeles, California. Lisa and Lenny had eloped just a year earlier and were in their early twenties at the time of Zoe’s birth. They didn’t plan the pregnancy at all, and when telling Lenny, Lisa reportedly “threw” the pregnancy test at him.

Lenny was just gaining a footing in the industry and was a few months from releasing his first EP. Lisa was written off The Cosby Show as a result of the pregnancy. Though the young parents hadn’t planned on bringing life into the world so quickly into their marriage, they were ecstatic over their daughter’s arrival. However, their marriage couldn’t overcome their disparate personalities and parenting styles, and so Lisa and Lenny decided to head their separate ways and get a divorce.

[My mom] always tells me I saved her life. She didn’t intend on being famous, but then she became this sensation, and she was so young and really private. So moving away, being with her child — she really responds well to stillness and privacy.

As a young mother, Lisa didn’t want to raise her daughter amidst the loud, overbearing chaos of Los Angeles. She and young Zoe packed their bags and moved to a serene haven by the mountains — Topanga Canyon. In a Rolling Stone profile of the 32-year-old actress, the area was described as a “hippie-ish enclave,” where Zoe grew up with a clutch of chickens and two dogs.

Lisa ensured that her daughter had access to a calm environment that nurtured optimism and patience. She didn’t want her daughter becoming one of those arrogant, self-centered, entitled showbiz kids who went around as if they owned the city. And so, she kept Zoe on a strict leash at times.

Zoe said that she wasn’t allowed to watch regular television. Their entertainment center only consisted of a VCR that her mother would keep unplugged most of the time, and she’d be allowed to rent a movie from the video once every week. The weekly movie night sparked a fascination for cinema and performance, which Zoe was empowered to pursue under her dad’s supervision.

At 11, she moved to live with her “busy” rock star dad in Miami

As Zoe was reaching her adolescence, her father invited her to live with him for a while. Owing to a tight schedule, Lenny hadn’t been getting to spend quality time with his young daughter up until then. He wasn’t necessarily an “absent dad,” but he tended to swoop in unexpectedly to spend time with Zoe and get applauded as a hero. Whereas Lisa, who’d been devoting her entire life to raising Zoe and nurturing her innocence, was taken “for granted” by her daughter.

That was a massive change. Going from this really quiet house in Topanga, just me and my mom, to my dad’s life, which was very busy — lots of people, lots of assistants.

Eventually, Lisa decided that it’d be healthy for Zoe to get to know her father properly and spend more than just weekends or holidays with him. At 11, Zoe moved to Miami to be with her father. Moving from a tranquil haven in the valley to a scintillating, boisterous party town had been a colossal shift for Zoe. It wasn’t just the location that stunned her; she had never experienced her father’s hectic, haphazard lifestyle so closely before.

When Lenny wasn’t recording music in the studio, he was getting acquainted with supermodels or picking up Zoe from school wearing a netted shirt, capturing everyone’s attention in one go. Zoe used to wake up seeing celebrities shuttling in and out of her dad’s house on a regular basis. For example, she had run into Mick Jagger once. She’d woken up to seeing Ashton Kutcher cooking breakfast in her kitchen. Lenny’s ex Nicole Kidman had taken teenager Zoe to the movies once.

Understandably, it was a little bizarre for a young girl who had spent a larger part of her life frolicking by the pristine, undisturbed mountains. Lenny had also been an impulsive individual who would have no reservations about taking his daughter to a tropical island on a whim. Zoe recalled a time when she’d been enrolled in a school in New York, but Lenny thought it’d been “so cold,” so he flew them out to the Bahamas for a whole month.

Zoe’s also been brutally honest about an eating disorder she developed as a teenager. Having been surrounded by supermodels at such an impressionable age in her life, she struggled with both bulimia and anorexia. This continued through her early twenties and subsided only a few years back. “Just [a hard time] loving myself,” Zoe explained to Complex. She also added that stepping into the unpredictable world of Hollywood exposed her to a number of impossible beauty standards. Hence, she felt “pressured” to force her body to look a certain way.

When your mom and dad are both so cool, but you’re not, I think maybe that’s where I get this idea that I’m not really cool. That has stuck with me forever.

Everybody showers praise upon praise on Lenny and Lisa for being the ultimate “cool” parents, but very few consider it from Zoe’s perspective. She had grown up feeling inadequate next to her mom and dad — knowing that no matter how hard she tried, she wouldn’t be able to hold a candle to their fame, charisma, or beauty. It was Lisa Bonet’s beauty that had threatened Zoe initially and contributed to her eating disorder. “My mother’s a beautiful woman, and I think, in some way, I felt intimidated by that sometimes,” she said.

Yet, despite her insecurities and doubts, Zoe maintains strong ties with the entire Bonet-Kravitz-Momoa clan. She has learned to admire her family’s best characteristics and has realized that both Lisa and Lenny love her in their own way. The family members are frequently seen on each other’s social media channels and even have adorable nicknames for each other. Zoe even calls her parents “buddies” sometimes but insists that they don’t hesitate to call her out if she gets into trouble. Lenny Kravitz also echoed the same sentiment: “We can talk about anything and everything,” he said.

There’s this Kravitz family thing where people think we’re really cool and serious, which always makes me laugh — because we’re some of the goofiest people in the world

It’s not unusual to compare yourself with your parent. Perhaps you want to emulate their best qualities, or maybe you want to avoid their worst tendencies. In Zoe’s case, she’d spent a better part of life wishing that she could turn out to be like her parents — beautiful, charming, confident — but realizing along the way that she was her own person and had cultivated attributes that were unique to her and her only.

The key message to take away is that we need to begin embracing our parents’ quirks instead of focusing on whether we’ll inherit them. Some may have abusive, toxic, or uncomfortable relationships with their parents, but those who don’t should hold onto these bonds for the rest of their lives. Treasure your parents’ little quirks and habits — they’ll be the only thing to keep you going through the worst of times.

Man Finds Out Cab Driver Has Never Been To Amusement Park So He Invites Him
The Jaycee Lee Dugard Story | Surviving Captivity Against All Odds | Goalcast
Like It Or Not This Is The Truth! (You Are Self Made) Motivational Speech
There’s Nothing Wrong With Being A Little Bougie Sometimes
How To Surrender Your Heart To The Present Moment Without Judgment