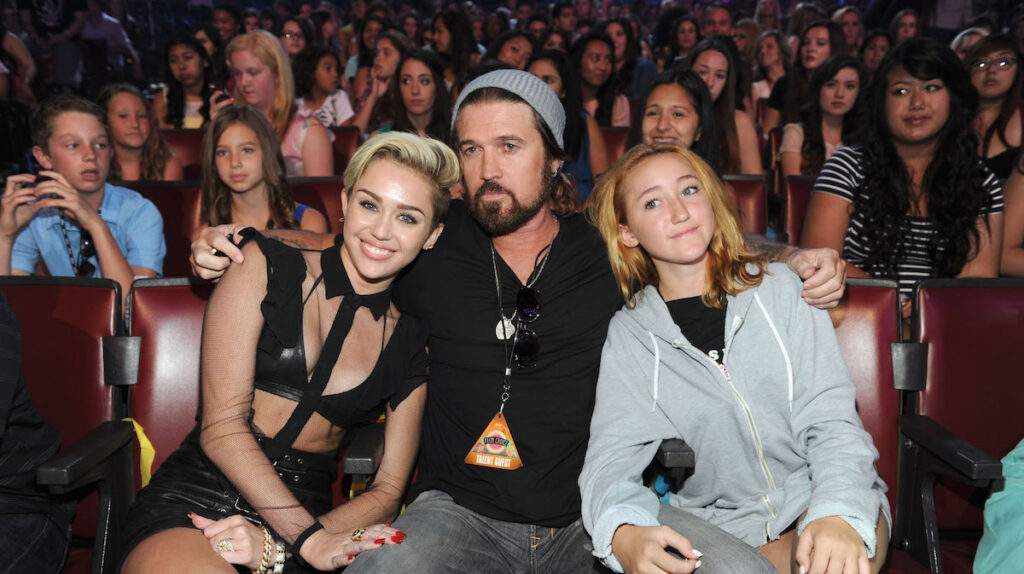 Famous sisters always get compared to one other—hell, even non-famous sisters deal with some level of unhealthy comparison. Such is definitely the case between Miley Cyrus, and her sister Noah Cyrus, who is 7 years her junior.

While Miley rose to fame on the Disney Channel as Hannah Montana and later took the music scene by storm, in recent years Noah Cyrus began releasing music too. But back in May, while discussing the release of her EP, The End of Everything, Noah recalled emotionally what it was like to grow up as Miley Cyrus’s little sister. “It was absolutely unbearable,” she said.

That destroyed my view of myself. That wouldn’t have happened if I wasn’t a public person since birth. That wasn’t my choice. I love my family but everybody has their issues. This was mine. It really f***ed me up.

Growing up, Noah felt “hidden in the shadows”

Although a talented musician in her own right, Noah had trouble growing up with Billy Ray Cyrus as her dad and Miley as her older sister. Noah said she wrote the song, “Young and Sad,” based on the experience of growing up hidden in her sister’s “shadows.”

“My sister’s like sunshine / Always bringing good light wherever she’ll go / And I was born to rain clouds / Blessed in her shadows.”

That’s why everybody always says to me, that no matter what, I was going to be in that shadow. And I always believed that, and that’s so hard for me to overcome.

“Being born in the family I was in, everybody gave me such a hard time for having a hard time being Miley’s little sister, but I always felt like I was that person that no one gave a shit about due to what people said to me online,” she said, while shedding tears.

Hopefully, now that she has been more open about her feelings, she is able to start healing from that early trauma. After all, opening up about one’s feelings, no matter how hard they are to express—and no matter how much judgement one might face for doing so—typically does wonders for the healing process.

In spite of Noah opening up about her experience as the lesser known sister, Miley and Noah have a close relationship. Contrary to popular belief, there is no bitter rivalry to speak of. Sure, they’ve gone through some tough times together, but both sisters are completely honest about all that.

Noah and Miley set an example for sisterhood

These days, both Noah and Miley put out amazing music and bolster one another as they’re doing it.

To date, Noah has released 2 EPs, 18 singles, and 4 promotional singles. Last January, for Noah’s birthday, Miley took to Instagram to showcase several of Noah’s singles in honour of her sister. But what garnered the most interest about Miley’s selection was her decision to share the artwork from “Love or Die,” Noah’s 2018 song with her now-ex, rapper Lil Xan. As a caption, Cyrus wrote, “Controversial to still love this song? Might delete later.”

As the story goes, Noah dated Lil Xan from June to September 2018, and it was a complete hot mess of a drama within weeks, what with accusations of cheating flying both ways, and Lil Xan’s anxiety and drug use being far too much to handle. Miley has always stood up for her sis, claiming that Lil Xan did cheat on Noah, and then tried to turn it around by accusing her of the same. “It’s sickening the way he’s trying to manipulate Noah and mess with her mind,” she said, adding that she wanted to help her sister get through the breakup, as that she’s better off without him.

When it comes to her sister’s solo singing career, Miley has expressed real joy. “She didn’t even tell me that this was really happening all of a sudden, which I think she wanted to really do it on her own. So I’m really proud of her that she did. I think she really didn’t involve me as much… I think she just wanted to get out on her own two feet without this having anything to do with me.”

In fact, Miley even got on TikTok and did some dancing to promote Noah’s song “The End of Everything,” and Noah has done the same for Miley on multiple occasions. These are sisters who build each other up and offer support—in matters of heartbreak and music alike.

Not to mention, Miley never took her sister’s expressions of hardship as the youngest in their family personally: she’s wise enough to know that it’s not about her. Impressively, these two have managed to be honest about their less than sunny feelings while still nurturing a close bond. I’d go one further and say that honesty makes you vulnerable, which in turn strengthens any bond that’s worth having.

Miley, having experienced life on the road as a musician for many years now, has said that Noah’s budding career has made her more relatable. “Now having someone that really understands how hard it can be when you’re away from home for a month, me and my little sister have a new bond over that,” she said.

She loves me more now that she knows I do something. She always thought I do nothing and that I went to put two wigs on.

Now, it seems, that Noah gets firsthand how much time and energy goes into being famous, the sisters’ empathy for one another has only grown.

Back in October, Noah took to Instagram to express how excited she was to have included a song with her big sister among the tracks on The End of Everything. “No one knows how happy and excited Miley and I are to be releasing something TOGETHER for our VERY FIRST TIME!!!! And it’s NOT the last,” she wrote.

This collaboration is the ultimate result of a strong relationship among sisters who are both doing their darnedest to grow and evolve together, rather than separately.