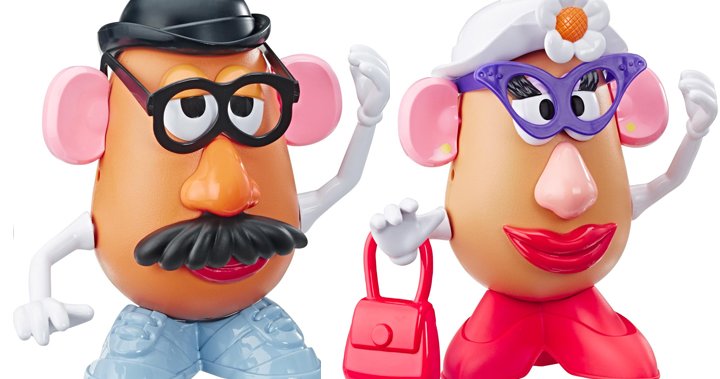 What makes a potato a man or a woman? Is it the presence of a moustache — or is it simply a name for a spud?

Hasbro is rebranding its decades-old line of Mr. Potato Head toys — including the separately-sold Mrs. Potato Head — to make them a single, gender-neutral doll with swappable limbs and accessories, in a move slated to take effect later this year.

Hasbro says it’s making the change to give the toy a modern makeover, amid a broader push toward more inclusivity in the toy industry.

The toy will be rebranded as Potato Head, without prefixes. Hasbro says it will release a new Potato Head playset in the fall that will allow children to assemble their own type of family, without being bound by binary gender roles.

4:55
Quebec dads tackle lack of diversity in toys with Black and mixed-race dolls

The rebrand is meant to give toddlers more space to reflect the family dynamics they see at home, according to Kimberly Boyd, a senior vice-president and general manager at Hasbro who works on the Potato Head brand.

“Kids like dressing up the toy, then playing out scenarios from their life. This often takes the form of creating little potato families, because they’re learning what it means to be in a family,” she told Fast Company.

“Culture has evolved,” Boyd added. “Kids want to be able to represent their own experiences. The way the brand currently exists — with the ‘Mr.’ and ‘Mrs.’ — is limiting when it comes to both gender identity and family structure.”

3:13
A guide to gender neutral pronouns

The announcement immediately triggered strong emotions on social media. Some welcomed the change, while others denounced it as an attempt to be “woke.”

“It’s a potato,” said Ali Mierzejewski, editor-in-chief at toy review site The Toy Insider. “But kids like to see themselves in the toys they are playing with.”

He told the Associated Press that the change could set a “new standard” in the toy industry, especially on the heels of a similar move by Mattel, which launched a line of gender-neutral dolls in 2019.

Mr. Potato Head toys have been around for nearly 70 years. Pixar’s Toy Story franchise also features Mr. and Mrs. Potato Head characters based on the toy.

The original Mr. Potato Head toy consisted of various accessories that children could jab into a real root vegetable that they’d have to supply. Hasbro later bought the toy brand and started selling it with a plastic potato.

The company says Mr. and Mrs. Potato Head will live on in some form, the AP reports.

— With files from The Associated Press