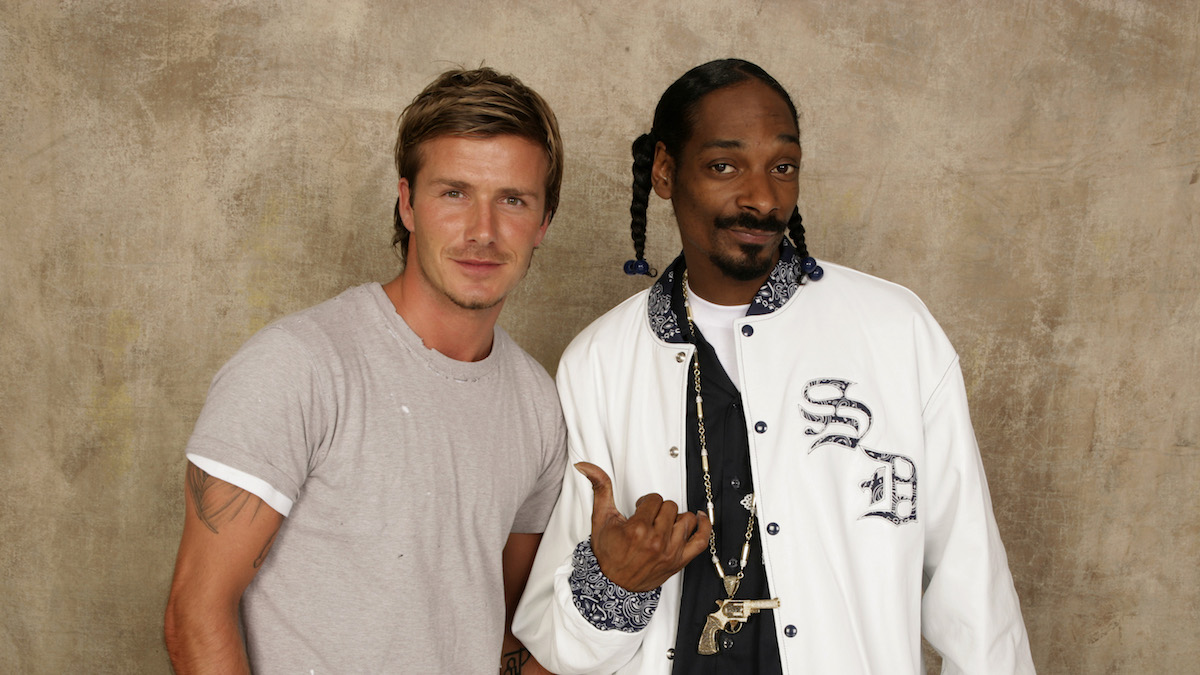 If you thought no pair could top Snoop Dogg and Martha Stewart’s friendship, you could be wrong.

Indeed, Snoop has a history of striking brilliant friendships with the most unlikely individuals, and David Beckham is yet another celebrity with whom he’s built a long-lasting bond. It’s always fascinating to examine these connections from the onset — how did they take shape in the first place?

One is an elite rapper from Long Beach, California, who’s had frequent run-ins with the law and has developed an entire following off his Rastafarianism lifestyle. The other is a posh English former soccer star who’s known for his free kicks on the pitch and his suave sense of fashion post-retirement.

Even if they originate from two completely different universes, they’ve still found a way into each others’ lives. Upon close examination, you’d actually be able to tell a number of similarities that unite them and make their decade-long friendship unique and meaningful. So let’s chronicle a friendship for the ages:

In 2007, David Beckham moved to Los Angeles to play in the soccer team LA Galaxy. At the same time, Snoop was shooting his reality show Snoop Dogg’s Father Hood, which depicted the chaotic lives of the Dogg family, including that of his three children, Rook, Chocolate, and Spank, and wife Shante.

During one episode, Snoop told his children about all the celebrities he knew, including the great David Beckham. His children didn’t believe him at first, so the rapper took his entire family along to meet David and play soccer with him in an episode appropriately titled “Snoop It Like Beckham.”

According to a Daily Mail article written at the time, David “jumped” at the chance to meet Snoop as he was a fan of Snoop’s music. Similarly, Snoop is also a massive soccer fan, so the feelings between the pair were mutual. David coached Snoop’s children on some dribbling tricks, and in return, Snoop took David out to his favorite restaurant in L.A., Roscoe’s House of Chicken ‘n’ Waffles.

Thus emerged a beautiful, albeit unlikely, friendship that has been going strong for 14 years and counting. Living in Los Angeles, both were able to get acquainted with each other in a relatively short period of time. In fact, they became so close that David even gets early access to Snoop’s much-awaited tracks.

Since I moved to LA, we’ve become friends, funnily enough […] His last album, he called me about 10 days before it came out, and he said, ‘I’ve just finished the album just this minute, why don’t you drive down to the studio and come in and listen to it?

One of the factors that drew David and Snoop towards one another is the shared solidarity over fatherhood. Both are parents to incredibly large families in the public eye, therefore they know a thing or two about raising their children amidst the harsh scrutiny of celebrity and fame.

Snoop had always been full of praises about David Beckham’s parenting skills. He said in an interview that he knew that David’s real passion wasn’t in soccer or endorsements or fashion or making money — it was family and being there for his kids.

I have never met such a passionate father. [David] is keeping it real for all fathers out there, and I can tell you he don’t want to stop.

In the same interview, Snoop talked about the Beckhams’ marriage and hailed it as one of the “strongest marriages” in show business. He’s so close with the family that he even envisioned the Beckhams having two other kids in addition to their four. Though Snoop’s forecast hits the mark, he might have had a hand in the Beckhams’ becoming parents to their youngest child and only daughter, Harper.

Snoop revealed in an interview that he had suggested to David that he and Victoria should conceive another child to the sound of his music. Though there’s no way to confirm this tidbit of information, we have to credit Snoop for his honesty and humor.

I said that after their 11th anniversary they should have some more kids and romance to some Snoop tunes. Now he’s having a beautiful girl to play with my daughter Chocolate.

Snoop Dogg to The Mirror

David says he and Snoop still “talk all the time.”

When David was turning 40, Snoop told The Sun that he was planning a huge fiesta for his friend’s birthday in Las Vegas. They had planned to party hard, because “what happens in Vegas stays in Vegas,” as per Snoop. He was going to take care of Victoria himself because he didn’t want David to miss out on a single second of chaos. “Forty is nothing these days. We’ll show we can go harder than the kids.”

It’s hard to tell whether this birthday plan came to fruition, especially if it was meant to be as scandalous as Snoop had implied. But it’s obvious that despite their busy careers, numerous career ventures, philanthropic work, and the toils of fatherhood, the two managed to retain the beautiful bond they had created over ten years ago in Los Angeles.

I love our friendship and some people in life just come together for some odd reason. Me and him came together on one night and we just became friends and we’ve just been friends ever since.

Friendship truly doesn’t have any rules

Snoop Dogg is an expert in forging wonderful friendships for the history books, and we would all be smart to take a page out of his book. First of all, it’s essential keep an open mind about people we meet — quite literally anyone could be a good friend, regardless of their age, sex, career, geographic, and so on. Secondly, we have to keep in mind that just because you think you have nothing in common with this person doesn’t mean a friendship isn’t possible. The most genuine friendships find something magical out of thin air, find commonality where there isn’t any, find connection when you exist in two separate, disparate worlds.

Finally, the last rule to building friendships is that there isn’t any rule whatsoever. You have to be there for someone when they need you and you just let the relationship flow however it flows. Keep it easy and give people a chance, and you could also end up with an odd but beautiful friendship like Snoop Dogg and David Beckham.