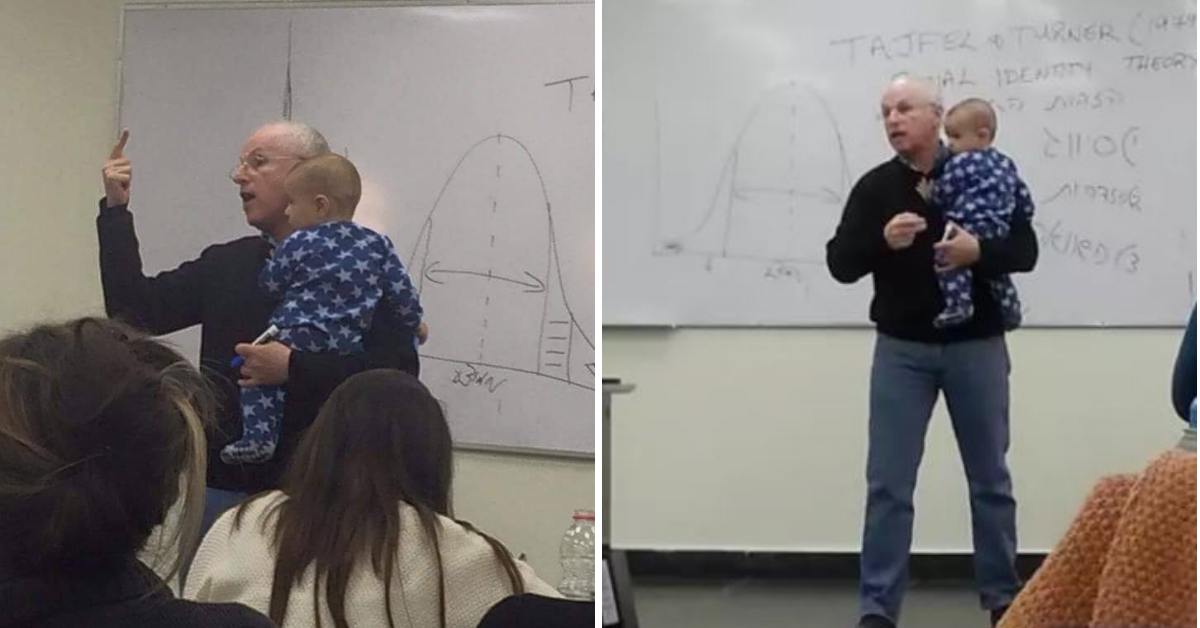 The simple act of a professor holding a baby while teaching a class went viral, proving how small gestures to accommodate mothers can make a huge difference.

Well before the pandemic closed classrooms and made close contact something to avoid, Israeli psychology professor Sydney Engelberg was spotted bouncing a baby in his arms while teaching a class.

“It was a spontaneous act,” Engelberg told CTV News. “I realized that [the mother] was going to have to leave the class, and if somebody didn’t do something then she was going to miss the material she was trying to study.”

Engelberg, who was teaching graduate courses in organizational behavior at Hebrew University and Ono Academic College at the time, has been praised for accommodating the mother.

“Good for him for understanding how hard it is for her to be a student and a mother and that she’s trying to better herself for her son,” one commenter wrote on the Facebook post.

“If only we could all behave that way to each other. Care for each other and treat each other with respect and kindness.”

Engelberg’s daughter Sarit Fishbaine said she’s not surprised about a photo of her dad going viral.

“For years he’s been telling his students, ‘Bring your children to class. It’s fine… they’re an integral part of the class. We’ll deal with them.’”

“My father is the best in the world,” Fishbaine wrote in Hebrew on the post.

Where accommodating babies in class is the norm

In Israel, young people are drafted into the military, so by the time they go to college, they tend to be older and can sometimes have babies in tow.

“I would say there is one or more babies in one or more classes every single week,” Engelberg told CNN.

And Engelberg isn’t the only professor in Israel who is empowering mothers by accommodating babies in the classroom. A Facebook group for the National Union of Israeli Students invited people to send in photos of professors holding babies and shared a few submissions in a Facebook post.

Engelberg teaches in his management classes that you shouldn’t just talk about leadership, engagement, empowerment, and respect — you should demonstrate it.

“You can’t simply talk about [these traits], you also have to act on them, and one of the ways that I’m able to act on them at least in the academic setting is by relating to the mothers — relating to those students who are unable to find alternative childcare arrangements in a way which enables them to remain engaged, which shows respect for their situation,” he told CNN.

But what seems so simple — accommodating hard-working mothers in a classroom — is rarely done in society, especially in the US.

Caretaking takes up so much time, but many mothers still need to work and study to improve themselves. We need to do all we can to support them in their endeavors.

Hopefully one day, a simple gesture like bouncing a baby won’t need to go viral because it’ll be so ingrained.