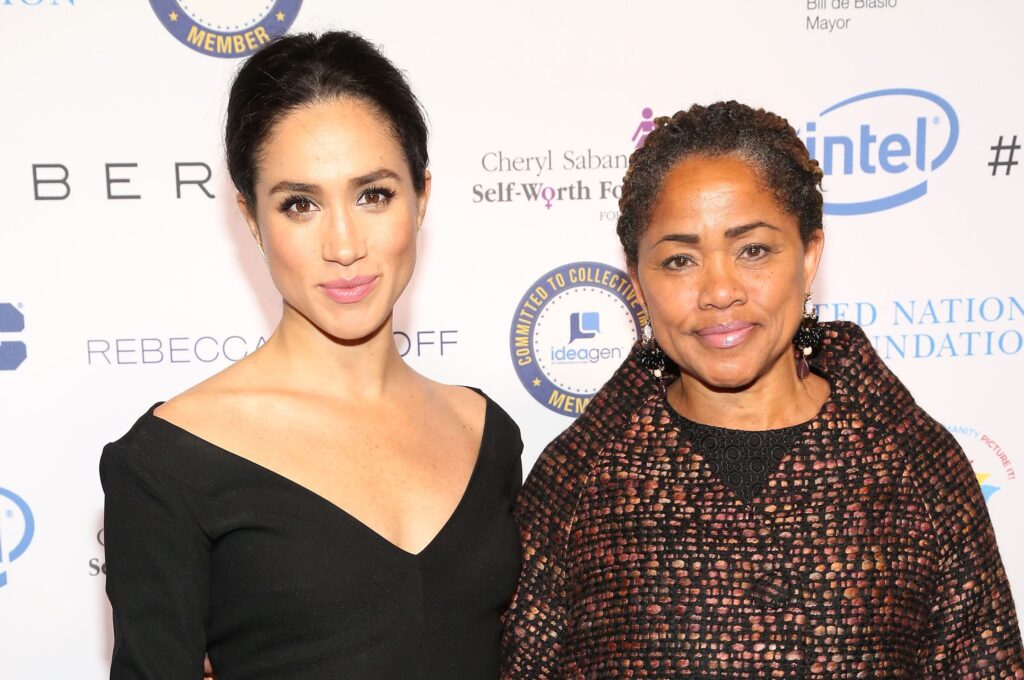 Over the last five years, Meghan Markle has become one of the most recognizable women on the planet. You may have first heard of her as Rachel Zane in Suits or followed her wellness blog, The Tig. However, since getting married to Prince Harry in May 2018, she’s hardly been out of the headlines. Some news stories have referred back to her difficult relationship with her dad.

She may have become one of the most famous people in the world but she’s highlighted how your parents and childhood can often shape who you are as an adult and parent. There are many ways that her relationship with her parent has influenced her future.

Meghan and Harry have spent much of the pandemic in LA with baby Archie. The couple made the move back to Meghan’s home city in March 2020. This meant that the couple are now much closer to Meghan’s mother, Doria Ragland.

Despite leaving the UK last year, Meghan and Prince Harry are still fighting a court case against Associated Newspapers for five articles which included one that published a private letter from Thomas Markle, Meghan’s father.

The case has shone a light on Meghan’s home life before she was part of the royal family and it would seem that in many ways, her parenting techniques mirror the ones she grew up around. She has said her relationship with her father only became difficult when the media got involved.

Who are Meghan Markle’s parents?

Meghan Markle was born on Aug. 4 1981 to Doria Ragland and Thomas Markle. In an essay she wrote for Elle in 2015, she revealed that her parents met at work in the seventies. “My dad was a lighting director for a soap opera and my mom was a temp at the studio,” she wrote.

I like to think he was drawn to her sweet eyes and her Afro, plus their shared love of antiques. Whatever it was, they married and had me.

The couple moved to The Valley in LA and Thomas Markle continued his work as an Emmy Award-winning lighting director. Doria Ragland is a yoga instructor and also works as a psychotherapist. Speaking about her mother’s work, Meghan said:

…For me to watch this level of life-long sensitivity to nurturing and caregiving, but at the same time, my mum has always been a free spirit. She’s got dreadlocks and a nose ring. She just ran the LA Marathon. We can just have so much fun together, and yet, I’ll still find so much solace in her support. That duality coexists the same way it would in a best friend.

Why did Meghan Markle’s parents get divorced?

Doria and Thomas divorced when Meghan was six. Despite this, the family remained close. In an interview with Vanity Fair, she said, “I never saw [my parents] fight. We would still take vacations together. My dad would come on Sundays to drop me off, and we’d watch Jeopardy, eating dinner on TV trays, the three of us…we were still so close-knit.”

While her parents remained separated, Meghan seems to have a clear image of what family meant to her growing up. “On Christmas morning, swathed in glitter-flecked wrapping paper, there I found my Heart Family: a black mom doll, a white dad doll, and a child in each color,” she wrote for Elle, “My dad had taken the sets apart and customized my family.”

Both Doria and Thomas have tried to remain out of the limelight and have never spoken about their divorce. It’s reported that while Doria remained in LA, Thomas lives in Mexico now.

What being in a mixed race family meant for Meghan

Both Meghan and Prince Harry have used their platform to speak about the racism and hate that has been directed at their family. Meghan has said that growing up she had to make a choice to draw her own identity box and introduce herself as who she is, not what color her parent’s skin is.

Meghan has spoken about her experience being mixed race and defending her mother. In an essay for Elle, she recalled her mother being racially abused leaving a concert in LA. “My skin rushed with heat as I looked to my mom,” she wrote.

Her eyes welling with hateful tears, I could only breathe out a whisper of words, so hushed they were barely audible: ‘It’s OK, Mommy.’

What Meghan Markle’s parents have taught her

Over the last few years, it’s become so clear to fans how close Meghan is to her mother. She was present at Prince Harry and Meghan’s wedding as the only member of her immediate family and at the birth of baby Archie. It’s reported that she lives very close to their Santa Barbara home. And their close relationship has influenced Meghan in other ways.

Prior to marrying Prince Harry, Meghan gave fans a little insight into her world through her health and wellness blog, The Tig. Up until April 2017, she shared recipes and revealed she’s completely sold on meditation and yoga. In an interview with Best Health Magazine, she said, “I started doing mommy-and-me yoga with her [Doria] when I was seven. I was very resistant as a kid, but she said, “‘Flower, you will find your practice – just give it time.’ In college, I started doing it more regularly.”

While Doria has a bearing on how Meghan stays grounded, it’s been reported that Thomas has always been a champion of her career in show business. “Every day after school for 10 years, I was on the set of Married … with Children, which is a really funny and perverse place for a little girl in a Catholic school uniform to grow up,” she told Esquire.

There were a lot of times my dad would say, ‘Meg, why don’t you go and help with the craft services room over there? This is just a little off-colour for your 11-year-old eyes.’

Despite their now troubled relationship, it is clear that it wasn’t always like that.

What happened between Meghan and her father?

Meghan has maintained that she was close to both of her parents while she was growing up. However, in recent years her relationship with her dad has been dissected in the media. On Jan. 16 2021 Thomas said he was working on a documentary about his life and Meghan which he hoped would come out later in 2021.

This news comes amid a trial that centers around a private letter that Meghan wrote around the time of the royal wedding. Thomas didn’t attend Prince Harry and Meghan’s wedding. Prince Charles gave Meghan away.

Thomas was due to fly from Mexico to London but days before the wedding an image came out in the press which he later admitted was a fixed paparazzi picture to improve his image. It’s been reported that he later revealed that he had a heart attack and needed surgery which would mean he’d miss the big day.

Yet, there would be further scandals with the press. In February 2019, it was alleged that Thomas shared parts of a private, five-page letter, that Meghan had sent to him which detailed how Meghan felt about her dad’s behaviour. In a statement heard in court, he said he felt compelled to release parts of the letter to the Mail on Sunday in order to correct “lies.”

In January 2021, he stated again in court that “the letter was not an attempt at reconciliation. It was a criticism of me. The letter didn’t say she loved me. It did not even ask how I was. It showed no concern about the fact I had suffered a heart attack and asked no questions about my health. It actually signalled the end of our relationship, not a reconciliation.”

As the court case is ongoing the details are only just being released in the press. This is how Thomas felt but Meghan’s lawyers have said that publishing the letter was a breach of her privacy and that it can be characterised as “a message of peace.” They point to the last line which reportedly reads, “I ask for nothing other than peace. And I wish the same for you.”

How Meghan complicated family has influenced her parenting

Meghan and the royal family haven’t commented on the ongoing court case involving Thomas. However, it would seem that Meghan has learned from her experiences and is determined not to let them affect her first son, Archie.

One of the main reasons that Prince Harry and Meghan gave up their royal duties and titles was to lead a more private life and enable their children to have more choice. The ongoing court case between Meghan and Associated Newspapers centralizes on her family’s right to privacy. By moving off the royal estate and having been strict about the pictures released of Archie in the press the family have been able to stay away from the tabloids which she got in-between her and her father.

After the repeated scandals involving her family, and the relentless attacks from tabloids, Meghan has been clear that it’s taken its emotional toll on her. Having lived through her own parents divorce and Prince Harry being aware of the role the press played in his own parents’ marriage, she may have wanted to give her relationship a chance to thrive in an environment that’s less pressured.

That isn’t to say that Archie has been totally kept out of the public eye. He made his podcasting debut on the 2020 Archewell Audio Holiday Special where Meghan and Prince Harry spoke some words to him and he repeated their words. It’s clear that they have a very close family bond, similar to the one Meghan described in her own childhood.