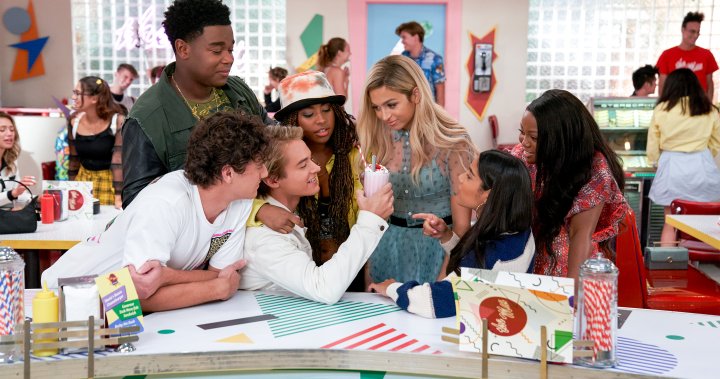 It’s back to school for Saved By the Bell.

The iconic series, a big TV show in the ’90s for kids and teens alike, has been rebooted in 2020 with an entirely different feeling. Zack Morris (Mark‑Paul Gosselaar), now governor of California, gets into hot water for closing too many underfunded high schools, so he proposes they send the affected students to the most well-funded schools in the state – including Bayside High.

The influx of new students gives the privileged Bayside kids — who never had a problem that couldn’t be solved in 22 minutes — a much-needed dose of reality.

Read more:
Meet Maurice LaMarche, the Canadian voice behind the Brain on ‘Animaniacs’

Elizabeth Berkley Lauren and Mario Lopez star in the new Saved by the Bell series, reprising their roles as Jessie Spano and A.C. Slater. Spano is now the school’s guidance counsellor, while Slater is the coach. Tiffani Thiessen returns as Kelly Kapowski Morris, now Zack’s official first lady. Lark Voorhies, who played Lisa Turtle in the original, will return for a special appearance.

Dustin Diamond, who played Screech in the original series, is the only original member of the Bayside gang to not return.

Global News participated in a conference call with the majority of the reboot’s cast and producers, minus Lopez and Gosselaar, and they talked about the show’s transgender character, how the episodes will look compared to the original series and what it was like returning to Bayside’s hallowed halls.

‘Saved By the Bell’ reboot and the comeback of ‘90s fashion

Global News: For Elizabeth Berkley Lauren, was it ever a tough sell for you to return to Saved by the Bell?
Elizabeth Berkley Lauren: For me personally, when I was approached by the studio and sat down for my first meeting with (executive producer) Tracey Wigfield, it was to me just a done deal on the spot. Also the fact that (executive producer) Franco Bario was joining forces — he was one of our original producers — and to just know that this team that Tracey was putting together and her creativity, her angle on bringing this back but with a whole new reimagining, something really relevant for now but still maintaining and embedding the things that people loved about it, her take on it, I was in immediately.

For many years, of course, different generations have come up to all of us from the original show… The meaning of the show and the love they have for it is so palpable, it’s so meaningful for them. What better time to bring something back that means so much to so many people and is a part of their childhood and joy, but then introduce it to a whole new generation with this amazingly talented cast? To me, this was the right time.

For the creators, how does Saved by the Bell address “modern” things like texting and social media?
Tracey Wigfield: Our show is set up at Bayside in 2020, but the fun thing about our show is Bayside is this bubble that’s a little bit like the Bayside you saw in the original show where it’s a bunch of weird, clueless kids who never have any real problems. There’s a lot of fun for me in getting to revisit this show that I loved so much growing up… For example, a character has a terrible giant cellphone like Zack Morris did, except now it’s not cool. It’s a big, lame cellphone.

Is the plan for this version of SBTB to have episodic stories like the original, or will there be season-long arcs/stories or maybe a mix of both?
TW: Yeah, it is a mix of both. What we’re doing here is a little different than… it’s not even exactly a reboot. It’s a reimagining. While the original show was basically a Saturday morning show for kids about high school, this is a single-camera, edgier comedy that I think will be exciting for people who love the original.

If you never saw the show, it’s just a funny comedy about high school in 2020 that I think you’ll enjoy. I wanted the premise to be kids from this other school coming into this weird Bayside bubble and being like, hey, this place is really strange and responding to it as though they’re walking into this original show in the ’90s. There are definitely one-off stories, for example, Mac and Jamie falling in love with the same girl without ever knowing her name, and they don’t figure out they’re in love with the same girl for, like, 25 minutes of the story. There’s things like that, where we poke fun at stories on the original show, mixed with larger arcs and love triangles.

Read more:
Justin Bieber, The Weeknd displeased with the Grammys — for different reasons

The way nerds have been portrayed on TV has changed a lot since the original. How will the new series represent the nerds and geeks at Bayside this time around?
TW: It was a rough show for nerds. I watched the original when I was in third through sixth grade, and part of the fun for me was going back with the other writers and rewatching the whole show and enjoying it and enjoying the nostalgia of it. I also realized when you watch any old show, the problematic things about it and how poor Screech and all the nerds were shoved into lockers and Slater would pick someone up and put just them in a garbage can, that’s not great to do now. Haskiri, do you feel like you’re being mistreated as a nerd on our show?

Haskiri Velazquez: Honestly no, I don’t feel like I’m being mistreated. I think, if anything, Daisy’s character rubs off on everyone else, and you get to see that throughout the series, how she’s this loving and charismatic person. She’s just so ambitious and she’s trying to find her voice, so it’s not really much about how smart she is, but more about finding her voice and advocating for her fellow Douglas classmates who come into Bayside. She wants to make sure that they’re not feeling out of place in this new school.

In the original series, Zack could freeze time. Will any of the characters in this version similarly be able to bend the very fabric of reality?
HV: Yeah, that would be my character, Daisy! We’ve been filming some of those shots and at first, it feels odd breaking that fourth wall, because as actors, you’re told not to look at the camera. I think it’s really fun being able to connect with the audience, especially because they’re not really there. So, I’ll be doing all that freezing and looking into the camera.

Josie, can you talk about how much this role means for you?
Josie Totah: Getting to play a transgender role on screen is obviously very rare. There is almost zero representation of people in the trans community, which, growing up as a young trans girl, I feel like never seeing myself made me never feel truly accepted by the world. So it’s amazing being handed a role by Tracey that shows a trans character where everything isn’t about her identity. My character is so many things. She’s in theatre, she’s, like, evil. She’s the popular girl in school, but she just happens to be transgender and I feel like getting to do that is such an incredible opportunity. I can’t wait for (other trans people) to be able to see themselves on screen in that way.

Read more:
Meghan Markle reveals she had a miscarriage in the summer

For the cast, how much did you look back to the original series?
Dexter Darden: Once we all got casted, we all got together and had a big lunch, and we talked about the original series and we actually made plans to get together and just watch it. You want to make sure that you can do everything in your power to uphold the integrity of it and continue to carry on the legacy that Elizabeth, Mario, Mark-Paul, Tiffani (Thiessen) and Lark… everybody set the template for us. I think we understood the history from it, and even throughout the beginning of preproduction, we would go upstairs and they would have the DVDs of the original series playing, just to put us back in that Bayside mentality and mindset.

Alycia Pascual-Peña: Piggybacking off of Dexter, I think it’s just so phenomenal to be able to experience those moments on set that are reminiscent of the original, especially because this show was prior to my time. I remember being up early in the mornings with my mom watching Saved by the Bell. It’s a surreal experience to be on a show from people’s childhoods. I think I can speak for all of us when I say we’re so grateful to be a part of something that has had such a large part in so many people’s lives, and already has such a large demographic and following and is really an incremental part of pop culture in many ways.

Belmont Cameli: Maybe this is for Mitchell, too, but I know that both of our characters are familial extensions of the characters on the original show, so it was important for me to go back and watch and see the character of Jessie Spano in her element, in high school, and get a gauge on what she was like and what our relationship may have been like growing up and then now, in a high school set in 2020.

Mitchell Hoog: I think there are little moments that are very nostalgic, too, like being called “preppy” or that kind of thing, that have been beautifully woven into the modern script. One of the other resources that I feel like we all talked about at that first lunch is there’s a YouTube series called “Zack Morris is Trash,” which I know I used a lot.

JT: What I love about the show so much is that it brings back all of those campy elements. We’re wearing the cute wardrobe. We’re doing those bits that are so funny, but we’re also talking about real conversations of race, gender identity and classism. And I find it so cool that we’re able to blend the two and make it an enjoyable experience. It’s not just about teaching lessons, but it’s also a really funny show to watch.

Catch the new ‘Saved By the Bell’ Thursdays at 8 pm ET/PT on W Network, with two episodes back-to-back per week. The entire first season is now available to stream on STACKTV.

This interview has been edited and condensed.