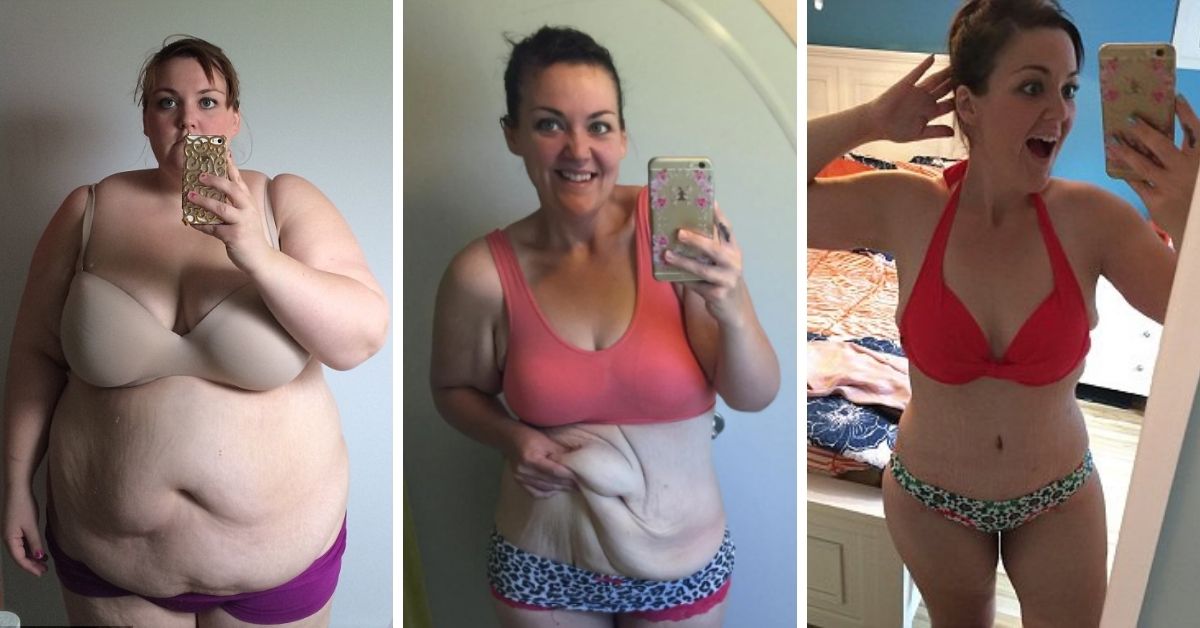 After another desperate attempt to lose weight failed, Mallory Buettner had an emotional breakdown at her doctor’s office before she finally got up the courage to completely transform her life.

“I had a meltdown in my doctor’s office and that was when they recommended surgery,” she said in an interview.

“I hated the idea at first. I thought I didn’t need surgery, it seemed like the easy way out,” she revealed.

Her weight had been a lifelong struggle

She struggled with her weight since she was a child and was eight years old when she went on her first diet.

My mum always made an effort to feed me lean meals when I was little, but I liked to eat chips, pizza and pop.

No matter how many diets or exercise programs she tried, Mallory wasn’t able to get a handle on her weight and by the time she graduated university, she hit 367lbs.

She tried a diet–but without results

Determined not to give up on losing weight, Mallory tried a new diet.

Unfortunately, the weight came back after she bought a house and could no longer afford the program anymore.

That type of restriction is really so hard on your body. When I tried to have a more balanced diet with whole foods, it just began to creep back on.

The biggest decision of her life

Discouraged, Mallory consulted her doctor who suggested she get gastric bypass surgery.

“I thought I could lose weight again naturally as I had done it before. I was so upset and I rang my sister crying,” she remembered.

“She was so supportive and told me to go for it. She knew I had always eaten well and tried to be active but nothing was working.”

In the end, I had to swallow my pride.

Following the doctor’s recommendation and a consult in November 2013, she booked her surgery for the coming May.

Mallory, who was newly-engaged at the time, unexpectedly found herself having to choose between her health and her relationship.

“The surgery was scheduled for two months before the wedding,” she remembered.

He wasn’t supportive and liked things the way they were. I think he thought I wouldn’t love him after I lost weight.

After everything she’d been through, Mallory chose to focus on her journey.

“We called off the wedding days before the date and never spoke again. It was the hardest thing but I had to choose to be happy.”

Sacrificing love paid off in other ways

Her surgery was a success, and she began losing weight.

“It just shows how desperate I was. I just couldn’t do it by myself,” Mallory admitted.

”I think that’s why I have been so open with it because I know how hard it is to ask for help.”

Complications did not deter her

There were some complications following the operation when Mallory had to get a hematoma removed through emergency surgery, but at this point, nothing could stop her.

Once she reached her goal weight of 185lbs, she decided to get 10 lbs of excess skin removed, to complete her transformation.

Initially the sagging skin was a badge of honour – it showed how far I had come.

“I had a goal of 185lbs but my surgeon didn’t think I would get under 230lbs. I proved them wrong and I was at a weight I could live a life that I loved,” she continued.

In the end, she realized she no longer wanted the constant reminder and decided to have surgery to get rid of it.

Her goal is to help others on a similar journey

Through her inspiring journey, Mallory learned to maintain a healthy weight through a balanced diet and regularly exercise.

“It has not been easy that’s for sure. I now know that surgery is hard and recovery is much harder. I’ve made sacrifices and it is not the easy way out like I thought,” she said.

She hopes her story inspires others struggling to lose weight to recognize that they are worth the effort.