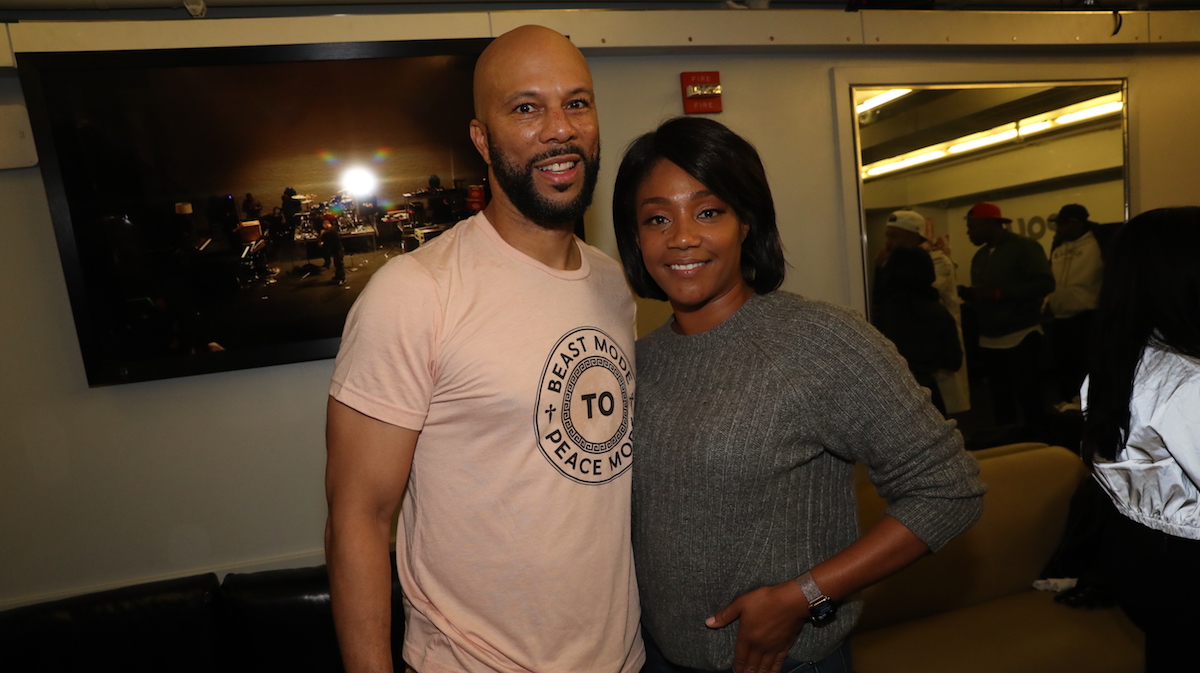 Tiffany Haddish has enjoyed great wins in her career since her breakout role in 2017’s Girls Trip, but as a result, her personal life often took a backseat. As she told Essence in 2019, it wasn’t until she “started to realize I wasn’t having fun and I was getting really lonely” that she began to properly prioritize her heart. “I’m always surrounded by people, but I wasn’t necessarily having an emotional connection with anyone,” she explained.

And so, making the decision that she needed to strike a better work-life balance, Haddish set out to find that emotional connection. Her journey included “dabbling” with Bumble (she’s actually a spokeswoman for the app) on which she “met some really, really smart and handsome guys,” but what she didn’t realize was that her perfect match and “best relationship I’ve ever had” was right in front of her.

Here’s what we can learn from Tiffany Haddish and Common’s quarantine romance:

Before she opened herself up to dating, Tiffany Haddish was on a break from men and it likely had something to do with her experience being in a toxic marriage. As the comedian revealed in her 2017 memoir, The Last Black Unicorn, her ex-husband, William Stewart (whom she was married to from 2008 to 2013), was physically abusive, had kidnapped her, and even stalked her.

She didn’t name Stewart outright in the book, but seeing as she’s only been married once, it was a safe assumption to make. Which is why Stewart actually sued Haddish and publisher Simon & Schuster for $1 million for “defamation, libel, and slander,” The Blast reported. As his lawyer put it, the actress’ claims were “patently untrue.”

As of 2020, they were still embroiled in a legal battle, but that didn’t stop Haddish from focusing on her. These days, she’s in a healthy, positive place thanks to a meaningful love connection she discovered when she least expected it.

Someone special can easily hide in plain sight

Tiffany Haddish first met Common on the set of 2019’s The Kitchen. Sitting down for an interview with Steve-O’s Wild Ride! podcast in July 2020, she recalled how the Oscar winner “was kind of like my love interest” in the movie and, while on set, they “became friends.” However, she was quick to specify that it “wasn’t anything sexual or anything like that because my eyes were set on something else.”

But that didn’t stop them from spending time together and building a genuine friendship off-set. After shooting wrapped, Haddish continued “talking to” and “hanging out” with Common. “He comes [over] to play Spades with me and my friends,” she told Steve-O.

They also enjoyed trying new things together. Case in point: Haddish shared an adorable snap of them at a painting class in March 2020, which she sweetly captioned, “Happy Birthday to my friend @common!!! I love that you are willing to go on @groupon adventures with me.”

Nothing can break a true connection

While Tiffany Haddish and Common were starting to spend an increasing amount of time together, a strong attraction began to form. Soon enough, their “friendship was getting [to be] a little more than friendship, but not quite,” she told Steve-O. Then the pandemic hit and everything came to a halt.

But a true connection is hard to break and the pair didn’t allow quarantine to stop their budding romance. Searching for ways to spend time together, they started “FaceTiming all the time” and even went on a virtual date for a great cause.

Their relationship is full of support — and laughter

“This is hands down the best relationship I’ve ever been in,” Tiffany Haddish proclaimed in July 2020, quickly adding, “Knock on wood!” Explaining what has made her time with Common so special and rewarding, she revealed it’s all about unconditional love and support.

“I’ve lost 20 pounds since I’ve been in this relationship; I feel more confident in me and it’s not him that’s doing it,” she said.

I’m just way happier and it’s like knowing I got somebody that cares about me, that really has my back. It seems like he does anyways. And I love it. I love him.

Common, who’s called Haddish “a wonderful woman, a queen, and just a beautiful person,” supports his new girlfriend in everything she does. Like when the actress had to jet off to Budapest to film The Unbearable Weight of Massive Talent in October 2020 and they proclaimed their love for one another in an adorable Instagram Live.

Or when she decided to shave off her hair and he was totally cool with it. “I had been talking about cutting my hair for years,” Haddish told Steve-O.

And he said it was beautiful, he’s like, ‘Wow, you did it man, You’ve got a lot of courage. You look so beautiful. I love it.’ And I’m like, ‘Ahh put your head on my head!’

That ability to joke and laugh together has been an integral part of their success as a couple. Speaking with Extra!, Haddish revealed, “We laugh all the time. He’s actually really funny,” she continued, adding, “I feel like it’s gonna work. I haven’t felt like this about a relationship ever.”

And the feeling is mutual. As Common told Live With Kelly and Ryan, “I care for her a lot, enjoy her and am grateful to have her in my life.” And he shared even more sweet words during an appearance on The Karen Hunter Show, saying, “We’re doing wonderful. She’s a really incredible human being. The more I get to know her, I just see how dynamic she is as a person — how intelligent, how selfless she is,” he enthused, adding “she’s also fun” and “has a wonderful heart.”

As Tiffany Haddish and Common show us, it really is true that sometimes you don’t see what’s right in front of you. The pair started out as friends and spent plenty of quality time together, but it took a natural progression for them to realize that they were developing deeper feelings.

The right person could already be in your life, but good things happen in due time. As a relationship naturally grows and develops, the timing has to be right, but friendship can blossom into romance. All you need to do then is be honest about how you feel and don’t let anything (whether it’s doubts or a global pandemic) scare you from voicing your truth. Only then do you open yourself up to wonderful possibilities and (hopefully) the best relationship you’ve ever had!