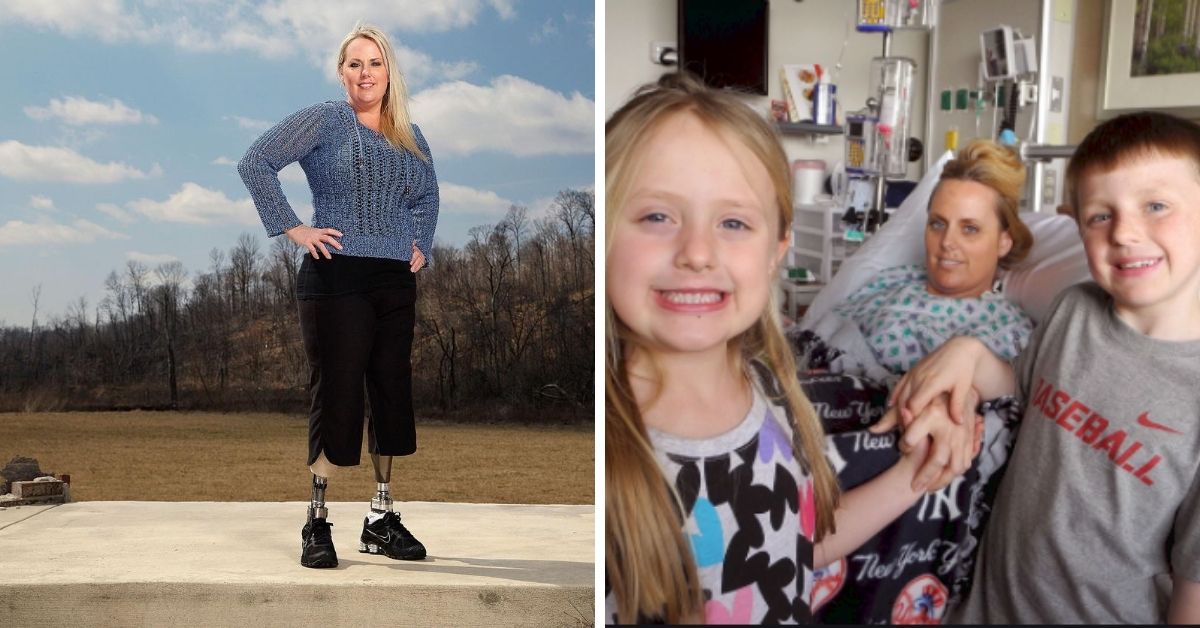 They always say that you never know what you are capable of
until forced to discover in that very moment.

Stephanie Decker discovered just how strong and powerful she was when she went through an incredible sacrifice to save her kids during a tornado, which resulted in the loss of her legs.

When the monster tornado hit, Stephanie only had one choice

When the first signs of the storm manifested, Stephanie thought that staying put would be the best plan of action. “I looked up and I saw our trampoline that was staked in the ground go flying across the yard,” she says. “Then the entire house started to shake. I became petrified at that point and one of the windows busted in.”

“I assumed I was safe, and I heard the roar like a train, and I heard it behind me, and I knew it was coming,” she recalled today. “And it was so loud that I knew that I needed to do something different. I knew staying put wasn’t going to work.”

She ran to her home’s basement with her son Dominic, 8, and daughter Reese. But then, the house began to disintegrate and she had nothing left but a comforter and her body to shield them with.

In protecting her children, she was buried under the debris

The March 2012 tornado hit Indiana in a major way, with 140 twisters, 76 confirmed landings and 39 deaths. “It was nothing I expected,”  she said. “I never, ever thought in a million years my house would be blown away.”

As she shielded her two children, Stephanie took the brunt of the destruction, as she was crushed under the cascade of debris. Both her legs were smashed. She’d also suffered a punctured lung. The most incredible part? She knew she could save herself, and chose not to.

“The pillar was coming straight for my daughter’s head,” Stephanie continues. “Now that I only have upper-body movement I can’t cover them so I’m twisting back and forth taking the brunt of the flying debris. I twisted my body and it broke eight ribs and punctured my lung.”

I knew my leg was barely attached or it was severed. I didn’t know which, but I knew it was bad. If I didn’t get help soon, I was going to bleed out.

One leg was severed just below the knee, and the other one was just above it. Throughout it all, Stephanie stayed incredibly conscious.

“I remember the whole thing,” she said. “I stayed conscious the whole time. I couldn’t afford [to pass out]. They needed me. They had to have me, so I had to figure out what to do. And my son is a hero. He went to get help.”

Watch this Goalcast video if you need to find strength after trauma:

Then, her son took over

Thanks to her incredibly heroic actions, both her children were fine. And once her son realized his mother was hurt, he crawled out and ran over to a neighbor’s house.

After … Dominic left, I realized I couldn’t get out because I actually used the comforter, I tied with them as a tourniquet. I knew I was cut.

Help soon came and Stephanie was evacuated to the hospital. The house was lost, but the family remains intact, and that was ultimately the most important thing.

Stephanie has no regrets

Speaking to People, Stephanie revealed that she had absolutely no regrets about choosing to save her kids instead of herself. In fact, she would do it all over again.

I don’t even think twice about it. I wouldn’t change it for a million bucks. Things happen for a reason. It was my time to step up.

And one year after the terrible tornado, Stephanie set up the Stephanie Decker Foundation, which helps children who have lost limbs to attend local sports camps.

She also took up running with her new prostheses, and one day, wants to be on Dancing With the Stars.

I love the impossible. That’s my forte.

Tragedy is not the end of life

Stephanie did what most mother or parent would have, but she did not let her newfound situation affect her life forever. For her, saving her children was a given. But what came after surviving was the real trial.

Stephanie decided that she would still be there for her kids and live her life to the fullest. That’s something we can all apply to our own lives. Surviving trauma is one step–what comes next is also another story of heroism.