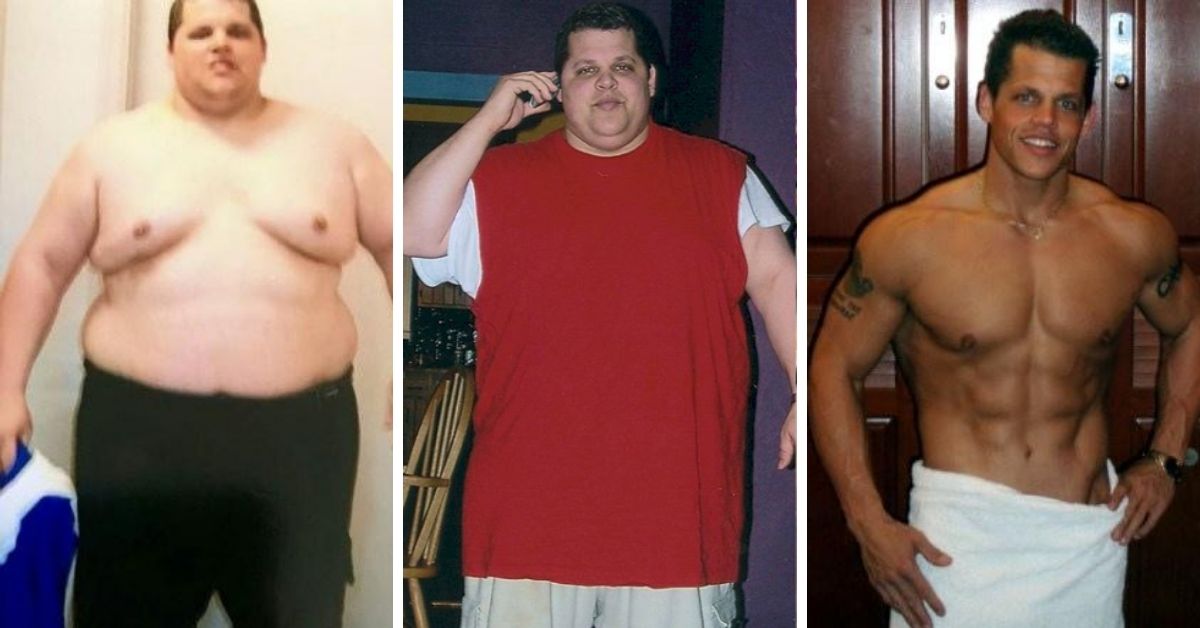 After being forced to buy two seats on a plane because of his size, Dr. Ross Gardner knew it was time to completely transform his life.

At 28, Ross, from Florida, weighed nearly 400 pounds and doctors gave him less than three years to live.

“Needless to say, these two events really made me rethink how I was living my life,” he told Men’s Health.

Graduation changed his life…not for the best

Following his college graduation in 2000, Ross went on to gain over 200 pounds over the next few years, which he now recognizes happened because of his unhealthy habits at the time, which included daily McDonalds.

Another major obstacle for me starting to lose weight was alcohol. I drank excessively every day for years.

Ross remembered there came a point where he drank almost a liter of whisky each night.

“I was drinking and eating close to 15,000 calories a night,” he admitted.

His diet became out of control, and like many, Ross thought his only way out was a crash weight loss plan, but to overhaul his unhealthy lifestyle, he needed more.

“At that point in my life, the only diet I had ever known was the Atkins diet,” he said.

Gardner decided to take another route though, and began educating himself on proper forms of exercise and nutrition.

He ditched his beloved daily McDonald’s breakfasts and replaced them with white omelettes and broccoli, and traded his video game addiction for a gym membership, which was no easy feat.

At first, I could only go to the gym for five minutes at a time.

But once the weight started melting off, Ross noticed a shift.

“It really opened my eyes to the true nature of people,” he said. “My experiences certainly lead me to believe that you shouldn’t judge a book by its cover.”

Feeling energized and empowered, he persevered and once he’d established a routine, he was eating six to nine times a day, with small meals that averaged 1600 to 2600 calories a day, a tiny fraction of what he was used to eating previously.

Watch this Goalcast video if you need pure, unbridled motivation:

Inner work was also integral to his transformation

Not only did he give up alcohol and junk food, to become a gym aficionado, Gardner also attended behavioral therapy to explore his compulsive eating.

In just 10 months, Ross lost almost 200 pounds and once he reached a healthy weight, he underwent surgery to remove excess skin.

Today, he helps other people with their weight goals through his chiropractic practice and recognizes that it’s not always an easy process.

He keeps pushing through the negative thoughts

But Ross is very candid about the lasting effects of his transformation journey. Yes, he does feel better but he reveals that he still battles with daily struggles.

I still suffer from body image disorder. To clarify, when looking in the mirror I don’t see a morbidly obese person anymore, but certainly I don’t see what others see.

However, he has learned to keep pushing through the negative thinking.

“I still struggle day in and day out with wanting to over-eat. If I do have a bad day or a bad meal I just move onto the next and I don’t beat myself up,” Ross said.

At the end of the day, “We only have one body. It’s very important we treat what we do have with respect.”

Give yourself a chance

Ross’ transformation started with choosing to live. It was a conscious decision that came with a lot of commitment, both physical and mental. And yes, losing the weight is only one facet of the journey–the inner work is just as important.

Whatever you decide to battle in your life, make sure to truly give yourself a chance by avoiding being too harsh on yourself.